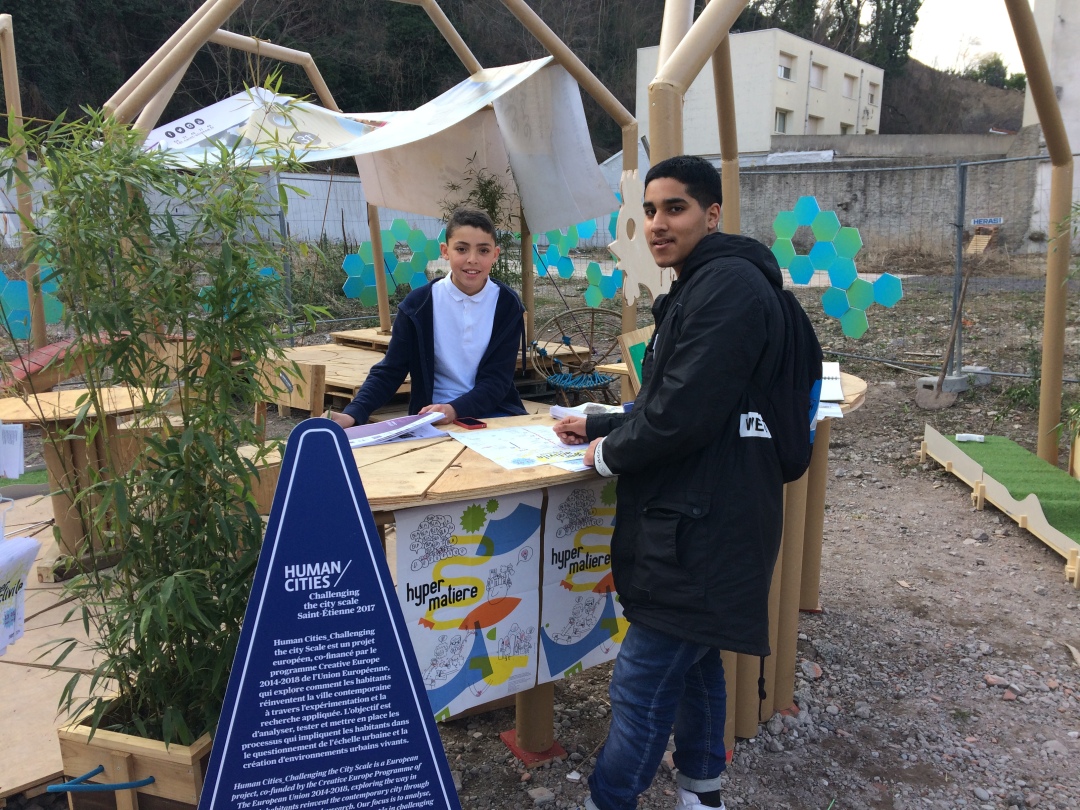 An Interview taken from architect Juliana Gotilla of Hypermatière by strategic designer Louisa Vermoere from Brussels.

About a bottom up co-creation space and reactivation of an abandoned brownfield in Crêt-de-Roch. The quarter is situated at the North side of the Saint-Etienne and is struggling with a growing number of abandoned lots and vacant homes.

Juliana Gotilla is a Brazilian architect who works with Captain Ludd association, together with other three designers. During an intensive erasmus periode in Milan in 2006; she underwent a series of participative design experiences among others courses by Ezio Manzini at Politecnico di Milano. After that she was motivated to return to Europe to implement what she was thought. She arrived in 2011 in St-Etienne to study a specialisation in “participatory project development” during a master course called: Public Space: Architecture, Design & Practice. After one year she started working in St-Etienne, where, after six years, she still works. In addition she has become a key figure in the Human Cities experiments of Saint-Etienne.

Captain Ludd is an association by three designers and one architect. It is a design and workshop studio located at the bottom of the other side of the hill in Crêt-de-Roch. Their mission is to find ways to collaborate with people to improve their neighbourhood. All year long we do workshops that submerse people in wood and printing technics. During spring and summer, if we managed to have the authorisation, we create, during wood and printing workshops, in public space. Like this we reach a wider and bigger audience.

The interview is left in an informal style, inspired by Hypermatière, a multi-disciplinary project sublimated at an informal place at Place du Coq. During the interview many people came to us. These intermezzo’s are kept to sketch more precisely the atmosphere of the place. Juliana Gotilla at the opening of Human Citizens Office, an other Human Cities project at Saint-Etienne.

L at the bar: Camille Vilain, coordinator of the Human Cities project, asked me to interview YOU of all the people working on this project. Why would that be so?

J: Because I work a lot (laughs). We won the call for projects, because our project, Hypermatière, matches exactly with the goals put forward by the Human Cities project.

L: Hypermatière was not only created by Captain Ludd but also some other organisations. Who else is involved?

J: In total we are four associations and some independents all with slightly different goals. Amicale Laïque du Crêt de Roch teaches popular education. Rues du développement durable, (free translation: Sustainable development street) is the first association that works on the problematic of vacant properties founded in 2009, and Association de Valorisation de Déchets . Furthermore we have Magalie Rastello who is a research designer, Yai Acosta, a ceramist, Matthieu Benoit Gonin, who is a gardener and Raymond Vasselon, a retired architect from the neighbourhood.

We form a trans-generational and multidisciplinary team from and for the neighbourhood. Since four years we work together in an informal way. For the Human Cities Call we took the opportunity to name ourselves Hypermatière.

L: A seat on the bridge. Where would this bridge lead us to? I see… a bar, some constructions that does not immediately reveal what they are, mini golf, art by day, a little greenhouse, photographer Etienne eating some meat from the BBQ, a little co-workspace with a stage along the street and a meeting table, a workshop area, a moving model of the quarter, an unmanned but enthusiastically welcoming desk that can be manned by anybody who wishes to. So what are the goals you are trying to achieve with this project?

J: The last two years we have been working in this street. We were mainly working on the sidewalks which are too narrow. After a two years presence, we felt confident to ask to the authorities to give us a part of this vacant lot, to make an ephemeral common space. So we got a quarter of the land that was the least polluted. In the beginning we were disappointed we did not get the whole lot but now we are glad: we only had to clear partially the plot of all the garbage and activate only a part of it. On top of that the plot isn’t flat but covered with rubble from the former building, which led us to the decision to make a landscape of platforms of different heights. The goal was to respond to the need of the neighbours for a free space for kids to play away from the street. First goal is to make this a common space and second, to activate it.

We aimed to make a trans-generational place where older people can take a seat and young once can play, jump make parkour and others can take some beer or coffee outside to relax. The combination has our installation as a result. Furthermore we have the greenhouse to keep our moral high. The greenhouse was the first thing we installed because we know that during the periode of the Biennale it is still cold and there is a big chance of rain. Next to it we have our workshop and behind you can see our ‘hypermateriothèque’, which is made of leftovers which I gathered from nearby companies during three weeks proceeding the construction. I first called to hear what they had, we came to pick it up only the day before constructing and we took only the materials we needed to avoid to leave the plot as it was before; a vacant plot with garbage. This was only possible since we had an idea of what to construct. This idea was developed together with the students of l’école de Beaux-Arts in Saint-Etienne (ESADSE).

We had already a refined idea of what is available to be reused because those materials were used in the previous biennale.

The whole process of constructing and activating this ‘vacant lot’ took place organically, I will sketch you our timeline how we proceeded. In the beginning of February I was calling all the factories to ask to leave the leftovers aside until we would start constructing. I called to understand what they had in stock. The day before the construction started I rented a truck to pick up all the building material to have it all here just before the building started.

L: Some materials come back in other exhibitions of the biennale. For example these ropes. Is the company that produces those ropes nearby?

J: No, actually there are quite some climbing halls in Saint-Etienne because of the proximity of the Alpes. Every six months the company taking care of the those climbing infrastructures needs to replace the ropes. Before the ropes were supposed to be sold to Africa but instead for years someone stole those loads that were to be shipped. After that scandal we were offered a big load of ropes which are now stocked in our studio. When we started the design with the students, the ropes, of course pallets and these tubes were at the top of the list of materials to be used. The tubes were also reused at the last biennial that’s why we knew were to get them. The flooring are the leftovers of the Detroit exhibition which was offered by the scenographer of the biennial who lives in this street. The irregular forms of these leftovers are now used during workshops with the kids of the neighbourhood. Last Tuesday we finished the structure. The finishing of the details will take place during each workshop in the coming month.

We constructed together with the kids the poultry run,  but a neighbour complained about the aesthetics of it. We invited him to come and fix it. The next day he finished the details.

Our goal was to create a public space but more we wanted to create relationships. Our presence at the site during good and bad weather made us get the respect and meet our neighbours.

L: Could you elaborate on what were/are the biggest challenges of the project?

J: People like what they are seeing, take pictures and tell us how magnificent it is. But basically what this place does not communicate is the process that proceeded it. A bottom up process, like we initiated, does not provide the structural support a cultural institution/centre has for the organisation of events. We learned out of this experience that 80% was meetings, 20% of our time went into building the place. Now it is constructed, we are spending time to activate the place, which is completely on a volunteering base. I talked during this festival with a colleague of mine from Detroit and she explained that she spends 50% of her time looking for funds for her designs. She realised it is better to collaborate with institutions that have the structural budget for the organisation. The challenge for us is how to make these bottom up processes framed and transparently communicated. What we are trying to do is to make urban space shared, although we do it in less conventional ways, we believe it caries the same goals of public authorities. Here we built a frame where everybody can participate in creating this shared space together.

L: As a Human Citizen, what would be your advice?

J: Be humble, do not be selfish and valorise all the people equally. Take care of the whole team, because it is this relationship that creates new relationships in the neighbourhood. The same you should be towards the community you work with. You are not giving them aesthetics but you are creating together a shared space.

L: What is your biggest dream for the future?

J: Today was my dream, I am happy to be here on such a sunny day.