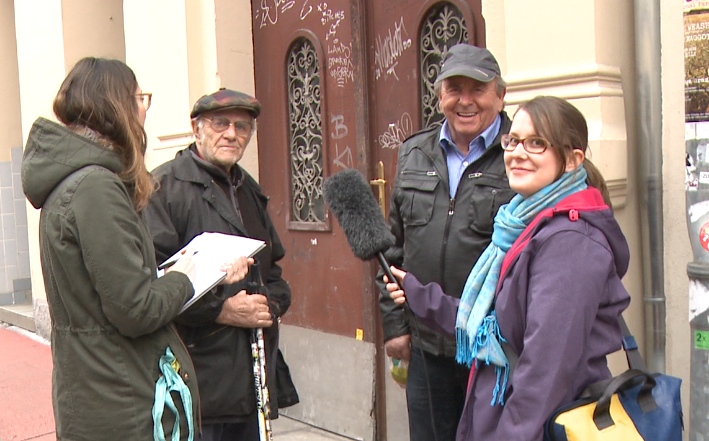 As we were looking for interview partners in the inner city district of Jakomini (start of the experimentation labs in Graz) we met two residents who have been living there since the 1940s. Karl (84) and Adi (77) have known each other since their childhood and have already experienced a lot in their neighbourhood.

Karl has been living in Klosterwiesgasse since 1940. First, he lived there with his mother and three siblings. Eventually, some of them got married and moved out and some have already died. Today, he lives alone in this former family appartment. ʺWell, that’s the course of life, you can’t change thatʺ, says Karl. ʺTwelve people live in the same house. We know each other, we greet each other, but I don’t really know most of the neighbours really well. They get younger and younger and that’s a good thing, but I don’t talk with them as much as I do with old friends and companions.ʺ

ʺThe neighbourhood is really beautiful nowadays, but you always need to lock up the house.ʺ Generally, Karl is an attentive and observing inhabitant of Jakomini. He once witnessed how someone stole a bike from the courtyard. Another time he saw two women and a young man kicking the side mirrors of a car. Karl didn’t hesitate and without further ado he called the police and gave them a detailed description of the three hooligans. ʺThe police found them in a park nearby the same nightʺ, he proudly mentions.

Adi lives just around the corner in Mondscheingasse, he has been living there for 68 years. Today, the night bars close-by are a thorn to his side. ʺYoung people leave the bar in the middle of the night and start to riotʺ, he says. His own car was once wrecked, but the insurance doesn’t pay for these kinds of damages.

He is also troubled by the noise in the streets, but he remembers: ʺWhen we were young, we were rather loud and daring, too. We were infamous in this hood. Elvis Presley was like a God to us, and the Rolling Stones weren’t that bad either.ʺ

With their motorbikes, Karl, Adi and their friends drove through the neighbourhood. Their gang was called the ʺMondscheinmöncheʺ. (engl. Moonlight Monks) They created the name themselves, it should symbolize their childhood and youth in Jakomini. Mondscheingasse and Klosterwiesgasse, that’s where most of them lived at that time and that’s where Karl and Adi still live today. The gang name is derived from the two streets they lived in: ʺMondscheinʺ (moonlight) comes from ʺMondscheingasseʺ and ʺMöncheʺ (monks) from the street name „Klosterwiesgasse“ (Kloster=monastry).

Adi feels nostalgia for his youth. „I always had a good time with my colleagues of the same age at Wielandschule. You don’t experience these things today.ʺ

If Adi could change something in his neighbourhood, he would consider a lot of things, but most of all he would make for more parking spaces nearby. Nevertheless, he is really happy here, as is his old friend Karl.