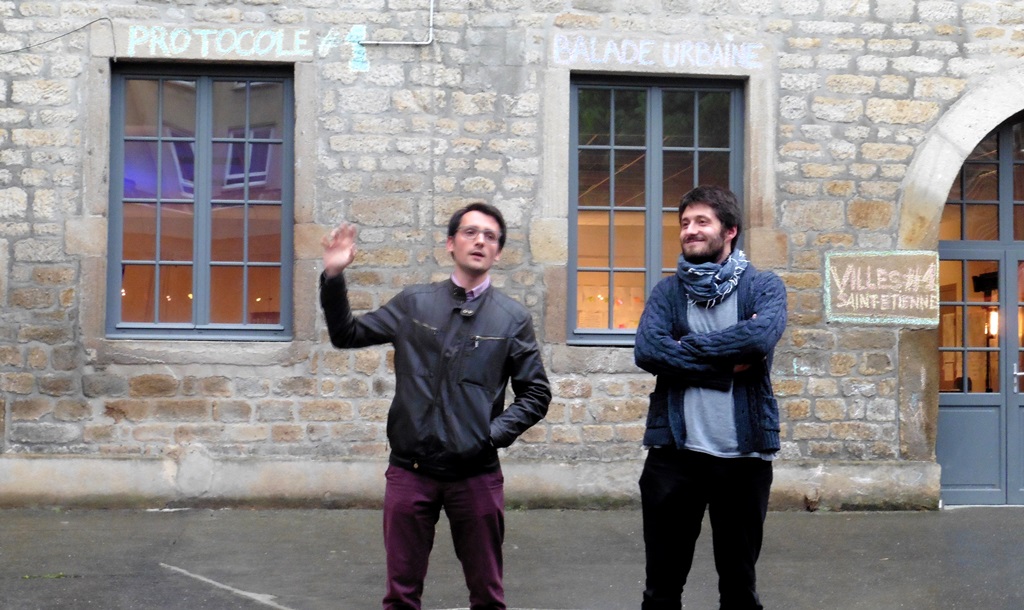 How to continue thinking about and making the city when your job as an urban planner seems completely disconnected from the realities of the field and its inhabitants? Why not trying to use the city as theatrical material? And how can we integrate the voices of people living in this city? When Yoan Miot, urban planner met Arthur Fourcade, director of the Collectif X, Saint-Etienne multidimensional theatre company, they built together “VILLES” (CITIES), a theatrical laboratory of collaborative urban planning.

From 2nd to 21st May 2016, VILLES#1 was in residency in the Beaubrun district of Saint-Etienne. This laboratory is associated to C.H.O.S.E, the Human Cities bottom up experimentations led in Saint-Etienne by associations following the Cité du design initiative. It will inspire the work of designers, architects, researchers, artists etc. who will then activate the neighbourhood in 2016 and 2017.

VILLE#1 Saint-Etienne portrays a sensitive image of Saint-Etienne and its neighbourhoods, its living stories, its multiple identities, contradictions, and aspirations. It gives voice to its real inhabitants, those which you can’t see in the 3D models of renovations, and it turns the artistic performance into an opportunity of collective questioning and expression around the theme of the city
As an experimental and collaborative theatrical laboratory, it is built on specific protocols: PROTOCOL #1 – URBAN WANDERING
During their residency, the actors walked throughout the city following an imposed itinerary. They collected their sensations: sound, touch, people they met, their wanderings. The performance begins as an adventure with these travel stories at a city scale. PROTOCOL #2 – PORTRAITS
A retired man coming back in Saint-Etienne after 30 years spent in another region, who discovers a city with a more intense student life, people exchanging seeds for community gardens and a changed social life; a young Tunisian mother stunned by the insalubrity of the house and who has the urge to “finish her study” to become a laboratory technician in order to work with a French diploma; a building caretaker comparing New York and Saint-Etienne, a cheese producer on the market.. During their residency, the actors organized interviews with all kind of inhabitants, collected their life story, their impressions about the city, and they reproduced, represented them by , saying “I, myself”. And let me tell you that you would not have known the difference: we could have sworn that it was really these inhabitants, in flesh and bone, in front of us. PROTOCOL #3 – PUBLIC CHOIR
During the residency, Collectif X organized workshops with schoolchildren, researchers, associations of the neighbourhood. They drew mental maps, wrote some texts, and answered questions about the city. The actors also collected statements about Saint-Etienne in the media and books. From this material they gathered 100 definitions about Saint-Etienne: scholar, poetic, absurd, provocative ones… These 100 shades of Saint-Etienne are read out loud, by a choir composed of the actors themselves but also members of the audience that were invited to open rehearsals every evening during the time of the residency and before the final performance. For anybody hearing it, it is fun and powerful. For anyone saying it, it’s liberating. PROTOCOL #4 – CONTROVERSY
During the residency, every evening, Collectif X organized a debate about the city: social housing, sociability in bars, the transfer of the theatre from this neighbourhood to another one, etc. In a similar way, the last part of the performance invited the audience to put forward their reflections and thoughts about urban topics and their way to participate in the city making. VILLE #1 Saint-Etienne fits in perfectly within the dynamics of Human Cities_Challenging the City Scale. It deals with the city as a human thread where stories and experiences are intertwined, where you can hear multiple voices, sometimes contradictory, or hopeful, or even very critical. Through its protocols, it offers an original way of collecting sensible, human scale, information, and sharing it, each evening with a different result, transforming the spectators into real actors of the city.

This precious material is shared with residents, researchers, administrative and political authorities which were invited to debates and performances. It will also feed the Human Cities experimentations in the Beaubrun district. Collectif X is one of the associations that will work in this neighbourhood to activate its streets, highlight its local life, build and put forward new projects and emerging activities to be set up in vacant shops.