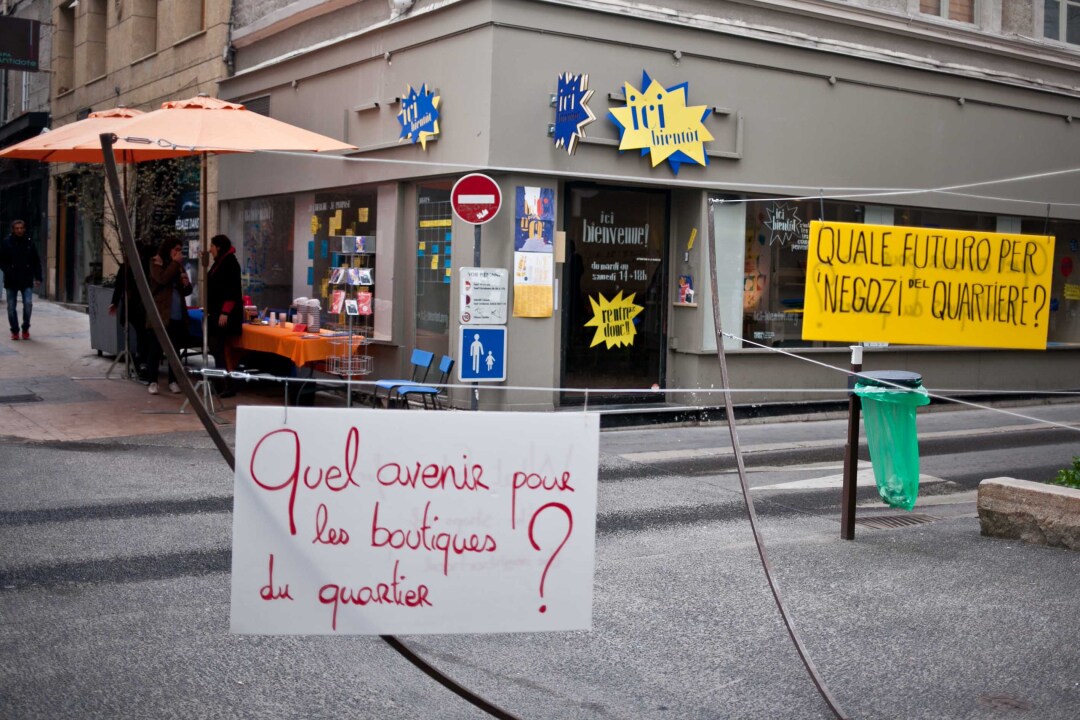 All along the year 2017,  Saint-Etienne has lived under the rhythm of Human Cities_Challenging the City Scale.

Saint-Étienne has got a distinctive feature of a creative laboratory, where hands-on stakeholders develop methodologies and actions with the communities to transform the city. That’s why the Cité du design, leader of the project Human Cities Challenging the City Scale in Saint-Etienne  has created C.H.O.S.E (Collective Humancitizens Office of St Étienne Experimentations), a tool to stimu­late and connect these local energies and creative forces.

Within this framework, Ici-Bientôt multidisciplinary group was launched to revitalize a commercial street in the old town.

Ici-Bientôt is a collective constituted for Human Cities experimentations in Saint-Etienne, to find solutions against the increase of vacant shops and breathe new life into the changing neighbourhood “Beaubrun Tarentaize” . Its main coordinators : CREFAD Loire, an association of long-life learning and capacity building, and Typotopy, a collective of graphic designers,  together with a working group of cultural, community associations and residents of the neighbourhood.

Its actions are complementary . Ici-bientôt worked on the history of the districts and its multicultural population ; they opened a resource center, suppor­ting  people  with projects to set up in vacant premises ; they transformed shop windows and signs  of closed or active shops, and they  invested the public spaces with artistic installations and performances. Their purpose: to increase the knowledge about the resources of the district, the dialogue and autonomy amongst their stakeholders. For that, they used mapping, interviews, music events, thematic workshops, business support, and a daily presence in the resource center from June 2016.

Mathilde Besse, who works for the Crefad, the main coordinator of Ici-Bientôt,  explains one  tool used  to collect people feelings about a collective question : “the word holder”

During the Biennale Internationale Design Saint-Etienne 2017 ( 9th March-9th April 2017) , Ici-Bientôt  helped the set-up of 5 temporary boutiques to test a professional, commercial or non profit activity, involving  30 people: a bar, a collective shop for craft designers ; an associative tea-room animated by volunteer mums of the neighbourhood ; a place dedicated to activities on reading and writing ; a visual and sound exhibition room. Restoration works with 30 volunteers from the neighbourhood helped to renovate the shops and injected a collective energy. Artistic interventions, performances and parties invited people to give a new life to the street. 150 people enjoyed the opening day in Rue de la Ville. Roundtables and workshops allowed the exchanges about the issues of vacant shops and transformations of work paradigms (the theme of the 2017 Biennial) During the last week of the Biennial, pupils from a professional high school worked with Polish graphic designers to offer new signs to 3 active shops in the upper end of the street.

International guests gave new inspirations and ideas. The workshop with the partners from the European project Human Cities_Challenging the Ciy Scale confirmed some intuitions or enlarged the perspectives about the re-activation of vacant shops. A roundtable with designers and activists from Detroit, the UNESCO City of Design guest of Honour of this Bienniail, allowed a fruitful exchange about leisure, work, and community building with the members of the collective.

After this extremely rich period of events, the activities of Ici-Bientôt got back on the support of project holders, mainly  with the action of CREFAD Loire, which office is now in the resource centre. The 5 temporary boutiques closed, but 1 permanent opened in October 2017, with the help of Ici-Bientôt. Thanks to their support to build her business and renovate a vacant shop, Souad, a seamstress, opened a shop proposing sewing and embroidery works  and activities and her fashion creations. A shared workshop space and craft lab will open for 6 months. 5 new shops will have new signs made by Typotopy.

Moreover, the Ici-Bientôt group is now associated to the working group of institutions, urban planners, and developers working on the renovation projects of the neighbourhood. They have been hired for their expertise and daily observation of the dynamics at the micro-scale of the district. Amongst the coming projects they are contributing to a new center for music and dance amateur practices ; a urban projects center and an action to support new entrepreneurs.
Of course it will happen  Ici (here), bientôt (soon).