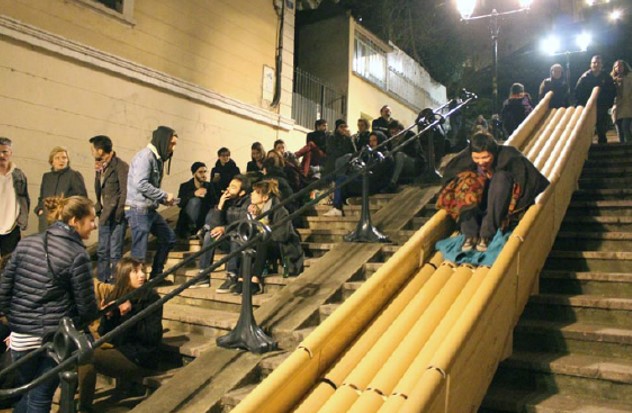 Introduced by the Captain Ludd designers, this participative workshop of manufacturing a “urban street slide workshop” aimed at creating a moment of meeting around a do-it-yourself activity with the the Crêt-de-Roch inhabitants. The project also marks the launch of a programming action in favors of the inhabitants who will regularly be invited to exchange around micro-projects. Times of initiation will then give way to real participative construction works going to the direction of a district life to be improved.

Main Promoter: the Captain Ludd designers collaborated with the inhabitants (children and adults) of the Crêt de Roch district for the “slide workshop”.

Secondary players: the students of the Saint-Etienne College of Art and Design (ESADSE) and the passers-by.

Beneficiaries: this playful device allowed to lead the public place, for an evening time, by allowing to play in the street. The beneficiaries were also the inhabitants of Saint-Etienne which visited or the passers-by.

The Captain Ludd designers works on games interfaces and interactive events at the same time in order to gather designers, public and inhabitants to establish a global thinking about esthetics notions, conception and manufacturing.