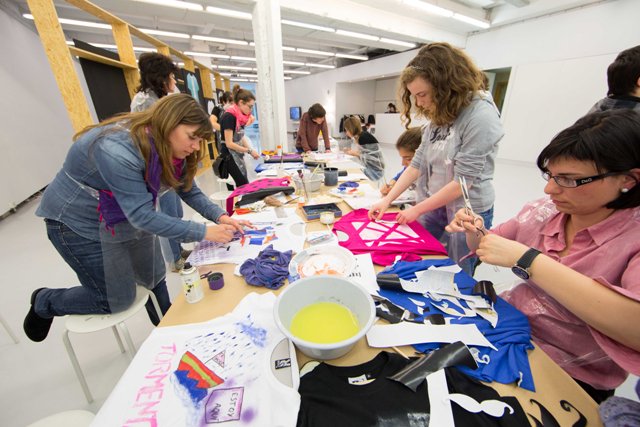 Bilbao is now in an ideal position for playing a key role on the international cultural scene, as:
– Its current model is based on an in-depth rethinking of industry, architecture, cultural and contemporary society.
– It has become an international benchmark of a 21st-century city thanks to its sustainable urban development and its commitment to a knowledge and creative economy.
The Arts in their multiple portrayals have been, and are, one of the main core areas that Bilbao has opted to underpin its transformation, and this initiative will consolidate that endeavour that began 15 years ago with the opening of the Guggenheim Museum.
This is the background to Bilbao Art District, where Bilbao City Council, Bizkaia Provincial Council and the art galleries are taking part in and are working together to organise the initiative. The Guggenheim Museum, the Fine Arts Museum, the Sala Rekalde art centre, the Maritime Museum and the shops located in the Ensanche district are also involved.
In the beginning it was supported by the European Social Fund project within the operational project from 2007-2015, but not now.
Bilbao Art District will be showcased through the Arts Weekend, which will be held in the zone on the 3 and 4 May 2013. . This event will be the unveiling of a project that aims to be a regular event on the calendar.
Bilbao Art District seeks to:
– Foster the artistic identity of the Ensanche district by means of a first-rate and coherent cultural offering that helps to further endorse the cultural and artistic leaning in the city.
– It is no one-off project. Both the communication and presentation campaigns and the two-day event in May will get the project underway.
– Bilbao Art District will be progressively developed over time as has been the case in many other cities around the world.
– Position Bilbao on the art international circuit and as an important art centre on the Bordeaux-Bilbao-Madrid axis.
– Create a favourable scenario to encourage leading artists to exhibit in Bilbao and also for city and its streets to be a platform for emerging local artists.
– Attract leading lights from the world of culture, international and national collectors, critics, curators, specialist press, designers and cultural tourists.
– Involve local residents and visitors in the project, and be a driving force for local business: art galleries, antiquarian bookshops, restorers, antique shops, design, architects’ studios, music, dance and drama schools…
– Ensure that the District becomes a major player to attract new businesses that drive the existing cultural and artistic offering.
This project is possible thanks to the joint work and endeavours of the private and public initiative, and it seeks to position Bilbao on the international art circuits, drive the economy of the city and enable an artistic offering that is a value added for the visitor.
Activities until now:
• Press conferences for the presentation of the project. 11-02-2013, 26-04-2013, 4-10-2013, 29-4-2014
• Project presentation at the International Art Fair, Arco. 14-02-2013. A presentation made by Alfonso Vegara and Metropoly Foundation.
• Official opening of the District in the Atrium of the Iberdrola Tower. It was attended by about 200 people from the culture and art of the city and nationwide. 3-05-2013
• The Arts Weekend: during the first weekend of May. Local residents and visitors are invited. In 2013, 2014 and preparing the next.
– The art was in the streets
– Conferences and workshops
– Guide visits
– Special activities in the galleries to bring art closer to the people
• Open the galleries season: in October, the galleries of the district simultaneously inaugurating their exhibitions with special activities and we designed a brochure with all exhibitions, an invitation…. Also, there was music at the streets. On the first week of October
• Guide visits around the streets of Bilbao Art District and to some galleries
• A newsletter monthly: the newsletter has information with everything arts activities in this area ,and it is send each month

Bilbao Art District is an initiative sponsored by the Bilbao City Council, the Provincial Council of Bizkaia (founders of the BIDC, and coordinators and main supporters of this initiative) and the most important museums (the Guggenheim Museum, the Museum of Fine Arts, the Rekalde Exhibition Room, the Maritime Museum and all the shops in the district of Ensanche, right at the heart of the city, galleries, art agents, etc.
This initiative is a comprehensive 2-day programme of first-rate artistic events, exhibitions and activities that will be performed for the Bilbao local residents and for visitors to the city alike. Each street of the district will be flooded with Art and Culture, turning Bilbao into a major Art centre.
The Museums will put on a special programme on those dates, the galleries will host a joint opening with longer opening times, the local shops are preparing interesting offerings and the streets will be alive with activities, music and artistic performances.

Design is involved in the initiative from the point of view of new participatory practices, bringing art to the streets.
Design is both implicit in the management and explicit in its activities. The point is to raise awareness and attract people to Art sector, mainly from the local environment and especially young and juvenile audiences. For example using small talks, guided tours, setting routes, contests, children’s activities…