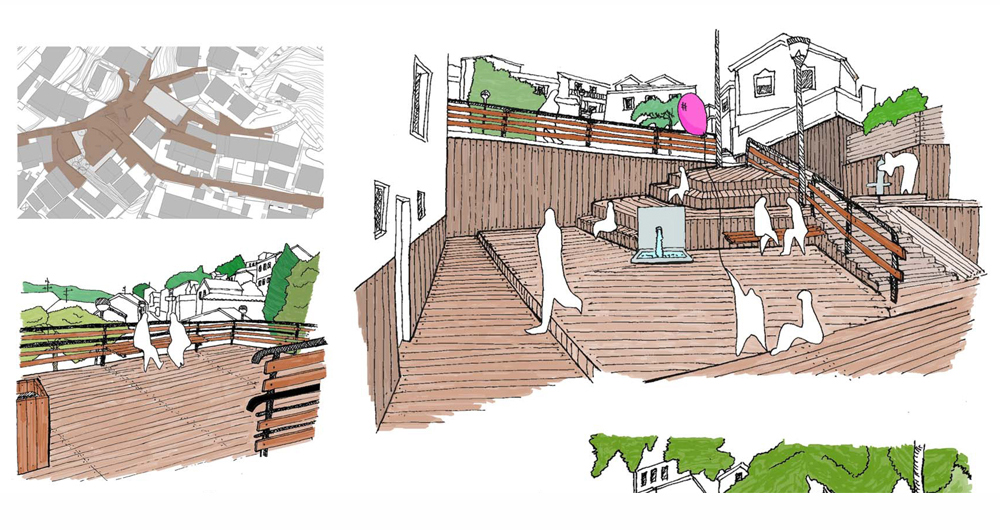 The first edition of the contest took place in 2012-2013, in that moment, and from an urban point of view, Bilbao could be seen as a city that was articulated in large infrastructures of mobility rather than in classic urban tissues. This interpretation of the city together with its collective infrastructures may overlook the fact that the identity and character of the city lays on day to day petty decisions.
Bilbao is the Great Metropolis, and so are its spots.
This initiative deals with ideas, international and interdisciplinary. It is open to anybody, groups, associations that wish to make improvements in the city.
Likewise, it involves social economic and or urban recovery and invigoration of public spaces that are derelict or under use.
This initiative means providing solutions to urban issues to improve quality of living of the citizens and their relation with their environment.
In the end, it implies a different urban concept where citizens’ participation is key, open to other disciplines in sciences and the arts.
Participants, requirements and regulations
International and interdisciplinary public tender, open to anyone, individuals or groups.
Anonymous proposals to be reviewed for the jury.
The budget is recommended not to exceed 180.000€
The project will have to be rendered in a DINA3 sheet hat will illustrate the proposal together with a narrative document and the budget in a DINA4 sheet of paper.
Projects, presentation and deadlines will have to comply with the published regulations.
The wining proposal should provide a solution to an issue or need. Evaluation criteria wil be the following:
● Artistic quality, the environment must go through a transformation that is meaningful and with a new identity.
● Particularity, it should answer requests, demands, criticism and suggestions coming from the citizens and neighbours made through the participation channels Bilbao Txokoak will make available and will publish in the webpage.
● Viability
● Capacity for invigoration, socially and economically
● Innovation
● Visibility, in as much as the proposed spaces are invigorated and made visible
● Sustainable materials and techniques
● Permanent and long lasting solutions
● Interdisciplinary, the ability to integrate diverse disciplines and to combine arts and techniques that go beyond conventional urbanism will be viewed positively.
Actions
Bilbao Txokoak has received 190 proposals for improving these 8 spaces since September 2014. The ideas coming from anonymous people, groups and associations have competed in equal conditions with those from professionals and specialized companies. The majority of participants come from the Basque Country, but projects from Madrid, Catalonia and the Valencia Community have been handed in, to mention a few, and even from outside Spain.
One of the main aspects of the contest is that of citizen participation. Thus, neighbours from Bilbao have once again had a say in key decisions for district life. El Correo newspaper has published every two weeks, from September 12th 2014, every one of the calls.
Once published, every location has been chosen via an open voting process where citizens can participate, to the extent that the vote by telephone has meant a 25% in the final count of the jury.
The Bilbao Txokoak tribunal was made up by representatives of the Area for Works and Services of the City Council of Bilbao, Bilbao Ekintza, neighbours and shopkeepers of the area under study, a representative of the Faculty of Fine Arts of the UPV/EHU and recognized personalities of the urban culture, likewise, the commissioners of the contest and a delegate of El Correo. All of them have evaluated the viability, particularity and artistic quality of the projects.
Furthermore, those designs that best met the requests, demands, criticism and suggestions from the citizens of Bilbao that have been made through the participation channels of Bilbao Txokoak have been taken into account. Throughout the popular voting process, projects together with their corresponding telephone numbers were indicated on www.bilbaotxokoak.raconspublics.com and the results were followed both in real time on the Intenet and in black and white thanks to exhibition displays installed in every centre of the districts.

– Arranged by Bilbao Ekintza with the support of the Area for Works and Services and the Area for Participation and Districts
– The newspaper El Correo participates as responsible for communications, calls, deadlines, follow up, awarding’s, etc
– Initiative commissioned by Racons Publics
– Companies, designers and architects participating with proposals for improvement
– Citizens: neighbours, social agents and associations of Bilbao.

As already mentioned one of the objectives of this initiative is to open up this urban discipline to other areas of knowledge, sciences and arts and at the same time recovering significant spots through the proposals of the participants.
A variety of solutions
Design, in general is the connecting element that participates in the initiative as practice, communication, public space design, services, etc.
Accessibility has been the main handicap in the majority of projects. In order to overcome that issue, the contestants have devised, designed ramps, passes, lifts and have signalled courses to improve circulation and the merge of distant and underused places.
In other cases, different activities have been designed/organized as a way for achieving a good integration of locations. Some of the projects require more green areas and more urban furniture. In sum, the variety of solutions and its different designs, shows how rich ideas and citizens, contributions have been for places so diverse as a park, the lower parts of an avenue, a tennis court… urban facts born out of petty great decisions that provide the city with its own character.