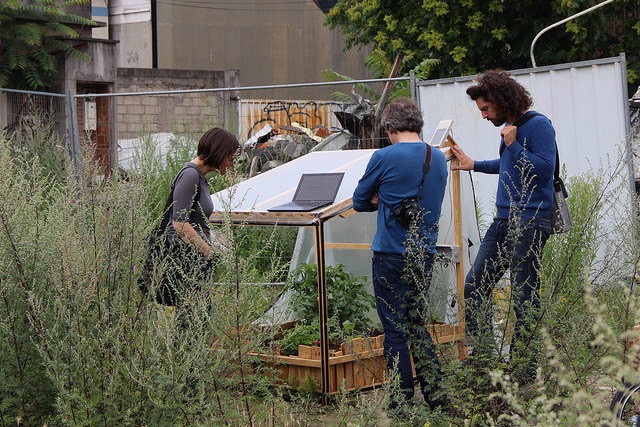 Chez Albert project is carried out on a proposal of La Semeuse in the context of a residence at the Laboratoires d’ Aubervilliers.

– Yes We Camp was born during the Camping Marseille 2013 project (an artistic and alternative project of ephemeral base camp that was built in 2013 on the banks of the Lave à l’Estaque). It is a multidisciplinary group constituted of architects, engineers, botanists, urban planners, artists, gardeners, handymen, designers, etc. These different actors gathered to create a laboratory for urban forms of nomadism, with travelers coming from all over to settle temporarily in the city’s public space, intuitively searching for enjoyable new ways of living multi-place lives.

– La Semeuse is part of The Laboratoires d’Aubervilliers (art center). It was born from collaboration between the artist/architect Marjetica Potrc and Severine Roussel, Philippe Zourgane, both architects in Aubervilliers intended to connect plant biodiversity and cultural diversity of the city. Currently coordinated by Ingrid Amaro, in 2011 the project was developed by landscaper : Guilain Roussel and Margaux vineyard. La Semeuse got the support of the Regional Council of Île-de-France, department of Seine Saint-Denis, CAF (Family Allowance Fund) of the Seine Saint-Denis, the ACSE (National Agency for social cohesion and equal opportunities), the city of Aubervilliers, Lapeyre and the Fondation de France.

– Les Laboratoires d’Aubervilliers (law 1901 association) is a place for experimentations, explorations, research and creation by the establishment of art projects. They are built in connection with the implementation context but also in relation with publics and artists. The projects uses all artistic practices: visual art, dance, theater, literature, etc, to create new forms of meetings, interactions of “living together”. The association is funded by the City of Aubervilliers, the General Council of the Seine Saint-Denis, the Regional Council of Île-de-France, the Regional Directorate of Cultural Affairs of Ile-de- France, the Ministry of Culture and of Communication

The residents and visitors

The transformation of an old wasteland into a cohabitation space for various events (musicals evenings, workshops for self-repair), questions the ways of involving citizens in the design of public space. The goal is simple : to emerge collective uses and succeed that this space of 3000 m² is appropriate and used by locals, after the destruction of existing buildings and before the construction of new buildings.

Chez Albert questions the future uses of this wasteland but also the mission of the inhabitants. It suggests new urbanity (meeting place, mutual aid, friendliness, etc.).

The major goal of the project is to imagine participative process. Concerts, shows, table tennis tournament, as many low-cost applications for communities and able to create spaces for cohabitation.