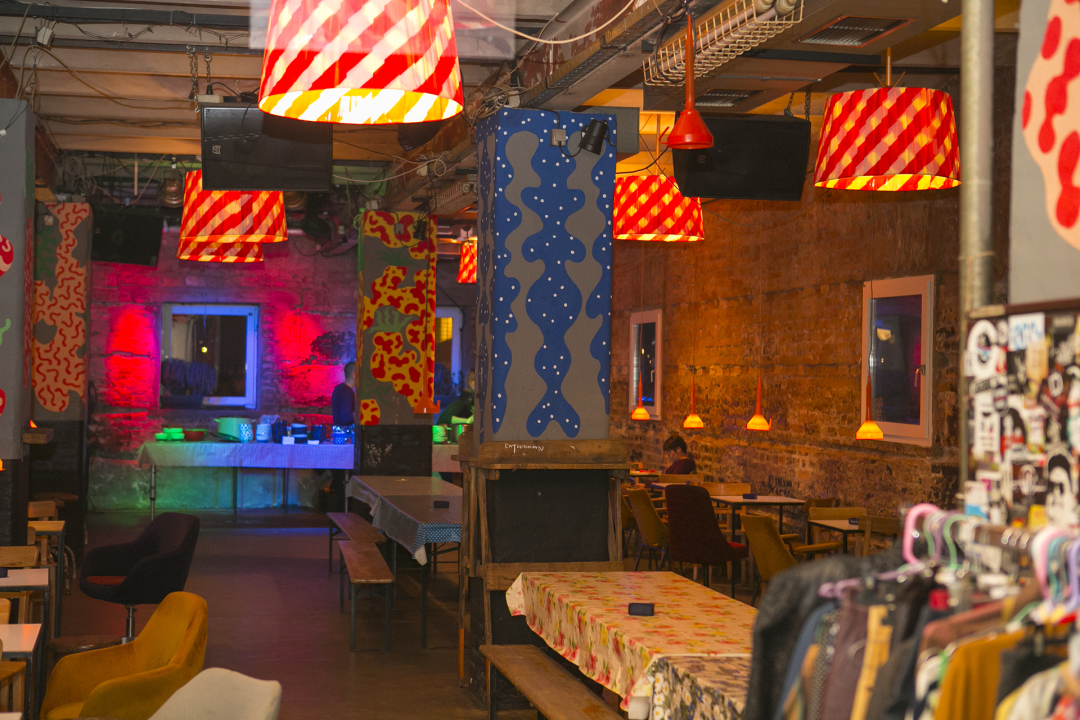 The GRAD European Centre for Culture and Debate, also known as KC GRAD, was opened on April 16, 2009. KC GRAD is the first independent cultural institution in Serbia. It is situated in an old 1884 warehouse located in the old, neglected and rundown industrial neighbourhood in the very heart of Belgrade, on the banks of the Sava river. The KC GRAD building consists of two levels with a total surface of 397 square meters. It houses a large gallery space, office space (also for freelancers to use) and an art library on the upper floor. The Steve Austen café bar and the Gradstor art shop are located on the ground floor. All together an interdisciplinary stage is offered for a diverse program, which ranges from music events, exhibitions, debates, book presentation and lectures to an educational program of workshops and an artist in residence program. KC GRAD It is a product of a joint initiative of the NGO Cultural Front Belgrade and the Amsterdam Felix Meritis Foundation. Since its opening KC GRAD became popular place in Belgrade. It has about 8000 visitors each month which adds up to approximately 70 000 visitors per year.

The program for the Big Gallery of KC GRAD is developed on a yearly basis and contains two main activities. First is the annual exhibition program, for which artists and curators can apply through an open call. An international jury selects between ten and fifteen projects to be presented through the year. Since 2010 the Big Gallery officially got the status of ‘gallery of the city of Belgrade’, which was accompanied by some advantages, for both the gallery as the artist who present their work. Both benefit from financial support as a direct result of this status and for the artist it also gained the possibility to become a member of one of the main associations for artists in Serbia. Beside the annual program, the Big Gallery offers projects that present and support the local design scene as well as international designers. In this second category ten to twelve projects, different fairs and exhibitions are realized each year.

Outside the Big Gallery KC GRAD presented the Serbian visual art and design scenes at international fairs, with the result that since 2010 a selection of our projects and exhibitions has been presented abroad, at the Supermarket Art fair in Stockholm (twice), at the Sofia Design Week, and at the Skopje Designs week. KC GRAD is also taking part in long term projects and international projects supported by EU funds such as Culture 2007-2013 and the program Creative Europe.

Besides our own produced events, KC GRAD is also a house for other organizations from the cultural field and therefor always open for external initiatives and ideas. As a result about half of the total program are events organized by other initiators and partners.

Key-actors
The GRAD European Centre for Culture and Debate, also known as KC GRAD, was opened on April 16, 2009. It is a product of a joint initiative of the Cultural Front Belgrade and the Amsterdam Felix Meritis Foundation. KC GRAD is currently run by the Cultural Front Belgrade, which was established in December 2000 and since then has been organizing many cultural events like: festivals, exhibitions and conferences.

Secondary players and beneficiaries are all the artists and creative who directly or indirectly participated in KC GRAD’s programmes, as well as the general audience who enjoy them.

KC GRAD emphasises applied arts and design strongly. Many individual and group exhibitions within these disciplines are organised through the year. Often combined with workshops and lectures produced in addition to the specific exhibitions, for which respectable experts are invited.