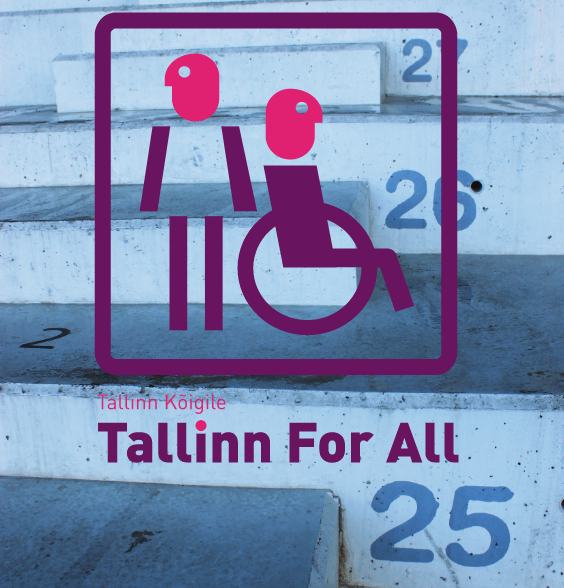 The participants have three goals:

— To make Tallinn a more accessible and comfortable destination and to improve it as a place to live by opening the city to more of its residents: people like the elderly, young mothers and the disabled.

— To achieve tangible results that bring attention to universal design.

— To introduce and further the methodology of Design for All.

In 2010, the Estonian Association of Designers (EAD) brought together European designers, Tallinn city officials, the Chamber of Estonian Disabled People, lecturers, and students from Estonian and St Etienne design school.

To whom we addressed the project, which was the TARGET GROUPS

1 Enterprises interested in development of new products and services

2 Estonian, foreign students and lecturers interested to learn more about Design For All methodology

3 Disabled people who want to be involved in design process

4 Public sector that is responsible for planning, social inclusion and financing

Participants had three goals: To make Tallinn a more accessible and comfortable destination and improve it as a place to live for all, to achieve tangible results that draw attention to universal design and to introduce the methodology of Design for All.

At the beginning of the research the accessibility group was concentrating on the analyses of the accessibility of the Old town and explore possible solutions for the problems. Surprisingly in the initial phases of the work the group and their mentor realized that the Old Town had become more a tourist attraction than an environment that Tallinners use and enjoy usually. The fact changed radically the scope of the project towards another subject: How the Old Town is perceived by the Estonians. Which are the problems that they face, their memories. The group came with the idea of using the methodology of the Gulliver Map to offer the citizens the possibility of expressing their feelings and aspirations throughout a festive activity. Prior to Gulliver Map, a group of students conducted a questionnaire among the inhabitants of the city to get an overview of the most significant problems. The project was carried out by students, volunteers and designers who supervised them. As accessibility group needed input from citizens before the Gulliver Map. On the bases of the poll the main problems were filtered and special pictograms were designed. They were later used for marking the experiences and proposals on Gulliver Map.

As a part of the “Cities for All – Tallinn for All” project, the Gulliver Map /name based on J.Swift’s novel/ was installed in the city centre. Gulliver Map is a project launched by a Japanese architect, Junzo Okada, and it aims to find a consensus between the citizens and the city and to improve the atmosphere of the city.

A huge map was installed on Vabaduse Square where people of different ages could write about their pleasant and unpleasant experiences in the city while concentrating on the issues of accessibility and functionality. The project has been carried out in several cities, most recently in Catalonia. The results will be presented to the city government for analysis. The outcomes of the project will hopefully draw attention to the concerns of people with special requirements and help urban planners in making the city a better place for everyone. The results will be used to drive future interventions.

INFORMATION DESIGN and WAYFINDING was the main focus of transportation group. They studied graphics for links, information and sign system. The trigger was incomplete information system and inadequate labelling of objects.

Two well-travelled and popular tourist routes in Tallinn were selected for analyses. Groups were asked to walk the route with their design partners and document their interactions with it – the difficulties they encounter in terms of wayfinding, street furniture, public toilets and any crucial interfaces with public information and transport systems etc. The group had to take the existing maps provided by the city and evaluate their effectiveness as well. In every group there were disabled or blind people who commented the situations.

In the beginning the transportation group studied the regulations for public transport and mapped the main problems. Research was done on site documenting the current state of information signage. A well known fact was that there was a lot of visual clutter in the buses, information was well hidden. The students discovered that a regulative document for graphical layout existed but it was not followed in general. Colur segmentation was unclear, signage placement was disorganised and unplanned. The team proposed a modular system with 4 main colours and with international symbols. The students presented their ideas in the middle of the project during Mobility seminar and they got comments and feedback from international experts about colors, disability symbols etc which helped them to improve their design in the final stage.

The transportation group brainstormed ideas with their design partners and produced two journeys: the first were the key points of difficulty experienced by the design partners on their journey.

The second journey was a holistically designed overview of how the route could be transformed through effective design interventions. The team should also propose how a new city map could be designed.

The transportation group tried to approach the problems with methods of graphic design and find solutions that are not only effective but also accomplishable.

Due to the unreachable budget there were no possibility to influence the acquiring of more low-floor buses, so the most simple thing was to offer the graphic solution. So the students proposed that accessible buses will be painted with special colours and the timetable will show the accessible transport also with colours.

Nowadays we notice that more and more partially sighted people or blind people travel autonomously. Because of this one team proposed the following idea: when you arrive in the airport, port, station, an information center of tourist office gives you a card (credit card format). You will have to give some personal information and they will give you a card programmed according to your profile. This language parameter and your choice of type of card (Orientation, access, shopping, freeways.) will allow you once in town to scan this swipe card in the different yellow terminals located in a wide environment and to obtain directly on your mobile the formation in the sound; image, text format (according to the parameters and the eventual disability). This system is accessible for everybody and can be updated in real time answering the needs of each people in an optimal way.

Also the students worked out of a very simplified map, easy to read for a sighted person and for blind people. Thanks to this map, the visitors can get their bearings in the city in a very autonomous way, and travel the way they want, contrary to a guided tour which leads you from one point to another following a specific route. The maps contain the most important information; the terminals deliver more detailed information about the place where we are. Any information indicated on the map like colors, pictograms; names is transcribed in tactile language: Braille for the words, textures for the colors and/or pictograms.

A RFID chip is located inside the back cover. It is materialized by a schema which allows the users to perceive well the chip and to familiarize themselves with the electronic element. The RFID chip interacts with the terminal which gives hearing information which comes to complete the map information. At anytime, a contact between the terminal and the map is enough to be able to locate oneself or to receive more detailed information.

The triangles are orientation benchmarks allowing to guide blind people or partially sighted persons in a particular direction. They constitute because of their shape an extra help for the white stick guidance in a urban environment full of obstacles. For example, they can be used in the malls to indicate the route to the information center or to keep the person away from a potential danger like the curbs.

The design teams tried to combine design and engineering in order to make the popular sites in Tallinn accessible to all. These people were constantly cooperating with each other and with the representatives of the city to made sure that their work serves its purpose and to tried to find ways of applying their ideas. One of the challenges they faced was auditing the accessibility of cinemas. Black Nights Film Festival wanted to make sure that their service is available to everyone and contacted our workgroup with a proposal for cooperation. The students and the test group, which consisted of people with different disabilities, a dog, visited several cinema screenings and expressed their opinion on how to make the visit to the cinema more convenient for all. Even services for blind visitors were designed, such as interpretation of the content for example. The organises of the film festival plan to export accessible cinema models also to other countries.