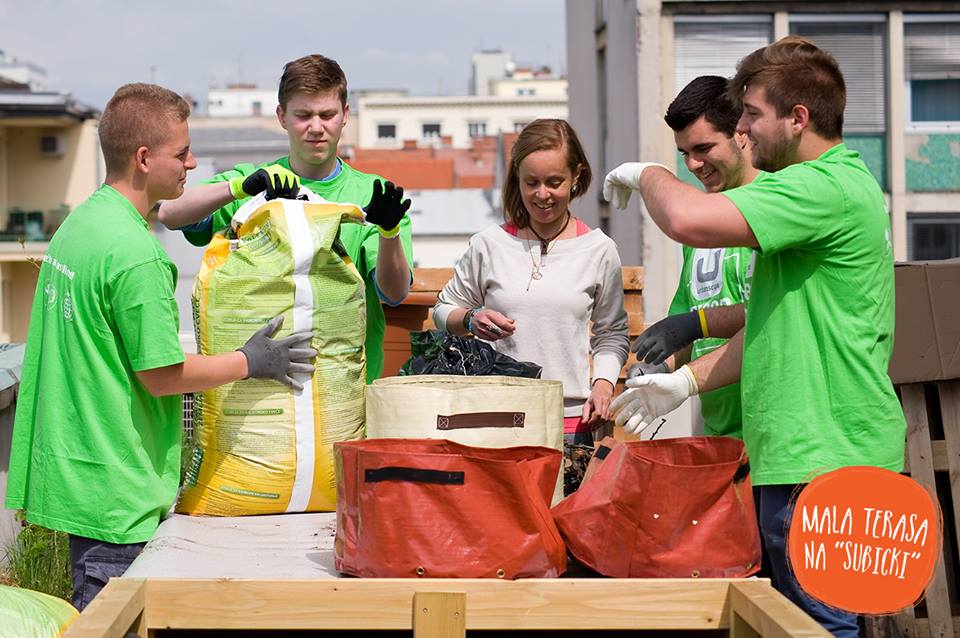 The group Pazi!Park has been existing for more than 10 years. The group was a really informal one for a long time, without any legal status, with the goal to raise awareness on the importance of quality urban public spaces to make the city life better. They are especially focused on the green urban public spaces.
Their first project was the creation of photo-comics stressing different issues existing in the public spaces. For instance one was talking about the issues of re-creating parking lots without greeneries to make them a nicer place. Another one was addressing the potential dangerousness of huge billboards for animals and especially birds. They also initiated some exhibitions. Around 5 persons were fully involved in the group at the beginning. Today more people are involved but the process of development of a project is still the same – people from the core group have an idea and jointly with the external partners who help they realize the project.
Usually, the association works on one big project at the time and on some smaller ones next to it. Small projects can be one day workshops, such as Jane’s Walk, an activity during a festival (for instance, in June 2015 they were participating in the Chelsea Fringe’s festival, a festival promoting Green Urban alternatives in the world) or small exhibitions. A big project takes a lot of time, around 5 to 6 hours per day. Therefore not all the members can have the same level of investment into the project. Most of the time, for those who have a regular job, the participation is more complicated but they somehow arrange their schedules according to the needs of the projects.
To detail the activities of the association we will focus on two projects they led at the beginning of 2015:

The aim was to create an urban garden on the roof of a high school. In this project the initiator was a teacher who invited different associations and companies to create this urban garden. Luka Vidic, Sara Cok, Jana Kozamernik, Mojca Balant were the members in charge of the organization of the project. Sara Cok and Luka Vidic implemented the project by having workshops with the students. From December to March, the group and the teacher developed the plan for the installation of the roof garden. Then they had several workshops with the students to create and build the roof garden. The goal was to give them some knowledge about the space (how to arrange a place, how to create pots for flowers etc.) and the vegetables (what kind of plants can someone plant to provide bugs to eat the harmful pests). The goal was not just to add the sustainability dimension to the high school environments but to learn good practices.
The action was volunteer-based, like almost all the projects Pazi!Park takes part in. This time, the teacher insisted to give some money to the two volunteers who had organized the workshops. Most of the time the earnings are not financial.

2) Watch out! Cameras on the slides!

In this project, the association worked with a middle school in order to evaluate the playing furniture in the surroundings of the school. The project was organized by Maša Šorn, Andreja Štrukelj Sinčič, Martin Turk, Urška Kranjc and was implemented by Urška Gale and Majda Koren.
Children had to create teams of 2 or 3 and walk around the place to make comments about the playing furniture. The association tested different methods to evaluate the place. They made the children draw their dream playgrounds in the first day. During the rest of the workshop, the association tried some more innovative ways of expression. They gave cameras to the children and played a role-play game. One of the children was a reporter and the other ones were the interviewees. They had to spend time in the playground and talk to each other. The reporter was asking questions about the place and each interviewee was sharing his/her thoughts with the reporter about the favorite place, the secret spot etc. At the end they created a small documentary together with the association and also some temporary (lasting one or two day) urban furniture. They were help by an architect Andreja Štrukelj Sinčič and a film director Martin Turk.
The results were very interesting. Children did not identify the same spots in their drawings and in the real space. With cameras, they were very much focused on trees, on greeneries, on hidden spots, places where they really play. With the drawing, they covered mainly urban furniture and games taking place in the playground. They do not have the same response when an adult is behind them, when they are alone to talk they tend to show how they really play.

Main promoters:
In most of the projects the idea is coming from the association Pazi!Park. Some other people can help them during the process of creation or can have the idea and then call Pazi!Park to support them in the process.
In project 1) the teacher was the initiator and Pazi!Park was one of the associations called to help in the process of creation. In project 2) Pazi!Park was the initiator.
Secondary players:
They change from one project to another but we can summarize them as follows.
• Participants of the workshops (students, children of a school, adults)
• Schools
• Institutional partners
• Sometimes the municipality (very rare)
Beneficiaries:
• Citizens of Ljubljana
• Pupils of local schools
• Animals (better green places where they can live)

Functional design: the goal of all the projects is not to make beautiful objects or plans but to make it as functional as possible. The idea is always to ask themselves: Why are we doing this project/object? What will be the function of this project/object? Where are we going to do this object/project? The association tries to take into account the users (human aspects), the future function of the object/furniture and the context (cultural or natural elements/environment).
A different approach to urban public space/Removing spirit: for the association adding urban furniture or objects are not always the good solutions to make a public space more livable. Sometimes the best solution is to remove some objects and let the space breath. They believe that adding furniture can block the imagination of users or block some usage of the spaces. It can be a good solution to create more relaxing spaces. Some years ago they launch Clean the space campaign jointly with the Ljubljana municipality were they tried to remove some furniture in the main streets of Ljubljana.