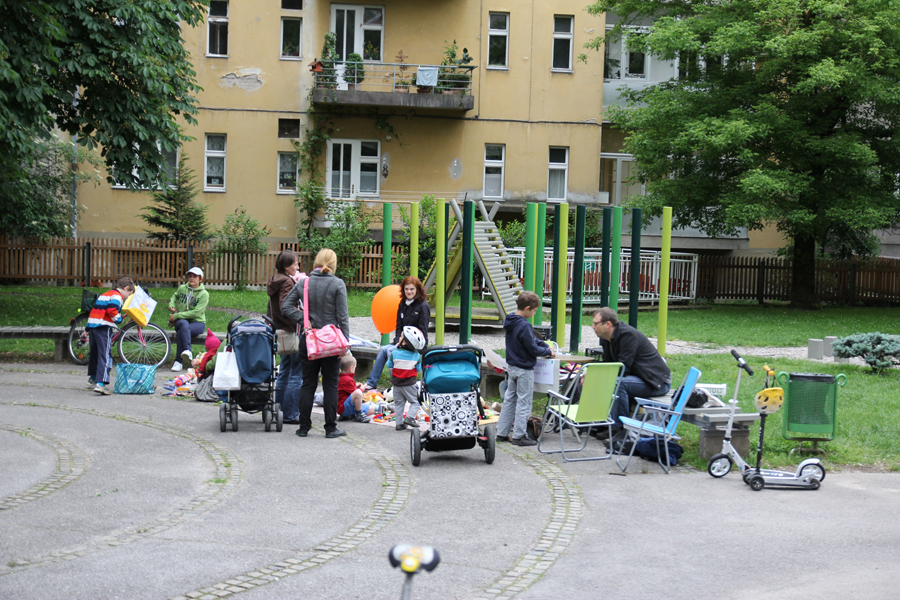 The association and the project of Prostoroz were created in 2004 by three young architects who studied together at the Architecture University of Ljubljana. The Ljubljana they were living in at that time was nothing to do compare to what the city is nowadays. The municipality action plan Ljubljana 2020 and the renovation of the city center started in 2006-2007. Tired, annoyed by their uninspiring and boring urban environments, but full of energy, the young ladies decided to create an association (zavod in Slovene).

Their first idea was to create an urban festival every year to talk about and to enlighten some specifics of urban issues in Ljubljana. The revitalization of the city center, which hadn’t started back then yet, was the first topic of the festival. The idea was to create small urban furniture and interventions in the public space to make people aware of the existence of an issue to be addressed. Basic furniture such as benches were added to the public spaces during the festival. Nevertheless, those installations were never taken into account by the municipality in order to build some more long terms ones. Therefore, the three urban activists decided to change the scale of their actions. They started to contact and inform the municipality about some urban issues in order to achieve long terms goals.

The association has developed many projects since their creation. Therefore we are going to enlighten only the most important ones:

This initiative provides to the locals a place to express themselves without dealing with the technical process of creating an event and to become more known by the wider community.

Today, they continue their activities in this area of Ljubljana by having the intention of renovating a playground close to the basket ball field. This time, the association has collaborated with kindergartens, primary schools and a center for disable people.

4)      Knjižnica reči (Library of things): Adapting a concept which already existed in Berlin, Prostoroz created this new type of library where you do not borrow books but objects. The association, with the help of their partner Polygone, started this project in an unoccupied space of a former community building. The project was financed thanks to some funds from the municipality’s fund for social projects. In order to understand what people’s expectations were, the association created a survey. People identified the most important objects that they want to borrow. The objects were donated by inhabitants and in exchange gained a one year free use of the library. In this library, you can find playing equipments, hiking shoes, rollers, tents, tools for gardening or household appliances. For thirty euros per year, people can rent whatever they wish in this library!

The project was created by three young architects who studied together at the University of Ljubljana. Maša Cvetko, Ana Grk and Alenka Korenjak, three active women in their thirties are still the leaders of the project. They also own an architecture firm. The architectural sector is in crisis in Slovenia momentarily. Therefore, architects are now involved more and more into bottom up initiatives and participatory actions.

For every project, the core group cooperates with different associations or citizens. From one project to another, the partners changed and evolved. It can be local associations such as Bunker or IPOP for Tabor Park project, or some institution such as the municipality or public schools or some groups of citizens who want to participate. Everyone is welcome to participate at the activities and everyone can ask for the help of the association to solve an issue in Ljubljana.

Design is not the major issue for the association, even though they try to pay attention to the colors, the shapes and the forms used for the construction of new urban furniture and communication tools. For instance when they created some benches thanks to recycle materials, they tried to reshape them and to paint them in nice colors related to the nearby environments.