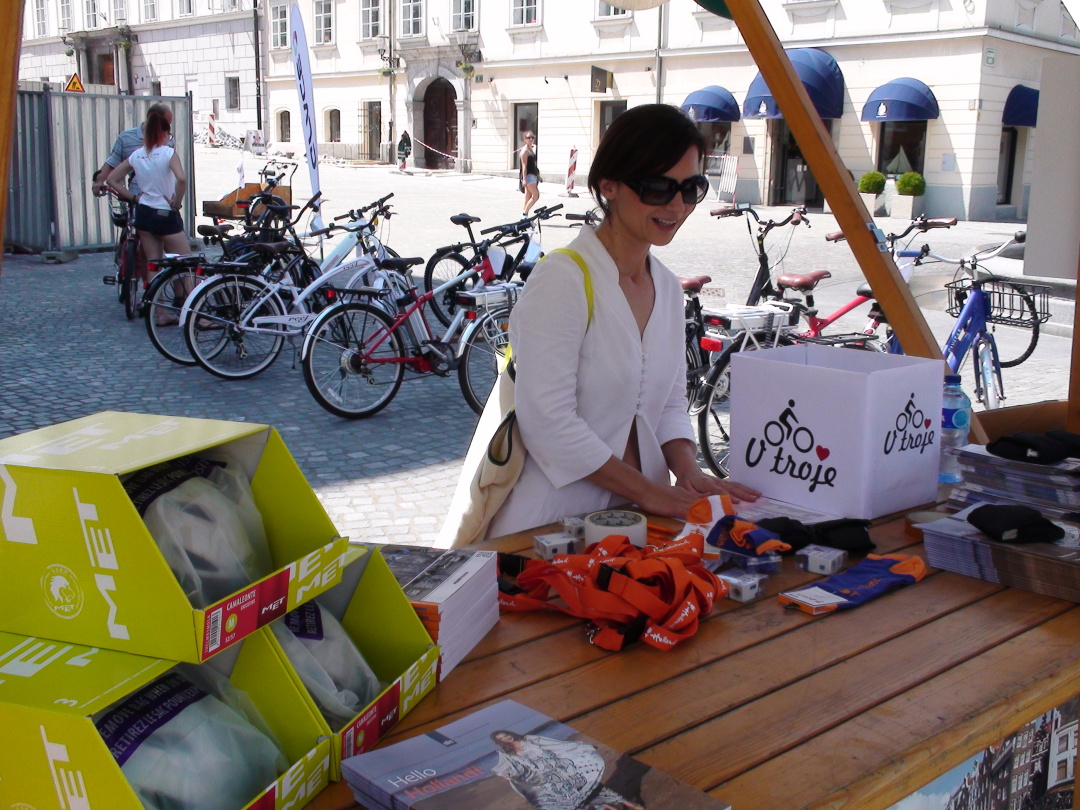 This bottom up initiative started in a formal way. 30 young professionals were invited by the British Council Slovenia (an institution promoting cultural relations, English, arts and other UK values in the world and trying to create relationships with active and innovative professionals and citizens of other countries) to invest their spare time to think and elaborate new ideas in the field of sustainable development and climate policies. Three working groups were created. Without knowing each other before, the future initiators of V troje set up a working group to address the urban mobility problems. In some time the idea of promoting bicycling to work was developed, not only to address the CO2 footprint reduction but also because this would contribute to less cars on the streets (so more space for convivial public spaces) as well as better health of population. Addressing the mobility’s habits of citizens was seen as a potentially fruitful approach with multipliable effects.

At the end of the meetings initiated by the British Council the idea was already ready to be implemented. The name V troje was chosen in a provocative way to symbolize the group of 3 members that will need to act as a group and support each other in their daily endeavours to leave their cars at home and instead ride their bikes for everyday routines.

To stimulate people to participate, the idea of creating a competition with prices was chosen at the end. The event is organized each May as spring’s weather helps people to leave their car and activate their bikes. Troikas have to report if they biked to work every day and how many kilometers they did. If a team as a whole biked to work in a majority of the days of the whole action, they were eligible for the prize draw. The kilometers were used only to calculate the reduction of CO2.

Unfortunately, the British Council could not supported the financial costs of this idea when it was ready. The project was stopped for a while.

Later on, when the British Council’s project was already finished, Matej Niksic, one of the initiators, got in contact with the Danish embassy which expressed an interest in the action. Thanks to this collaboration the project was born again and run as a civil initiative of three members. The Danish ambassador to Slovenia agreed to provide bikes for the final prizes. The web developer Tomasz Pirc created a first website where people could print the calendar, fill it in and submit it at the end of the action. And Eldina Knez developed a PR strategy to promote the action. Some other partners were found in a meantime (local municipalities, media, other NGO groups working in the field of sustainable mobility) and the action was successfully implemented 5 times between2010 and 2014. But after the success of the project, some legal issues pushed the team to create an association (drustvo) named Urban Moves- Association for rising the quality of urban life.

5 years after the first edition of V troje and after the creation of a new, more functional website as well as lots of time invested into the initiative, some of the initiators could not dedicated that much time to the initiative anymore. It was agreed with Luka Mladenovic, a member of Urban Planning Institute of the Republic of Slovenia and coordinator of an European project Bike2Work, to make the initiative part of a wider European project and upgrade it. Based on this the name of the initiative was changed for Bring Happiness to Work, the main objective stays the same (changing the mobility habits or urban dwellers and thus contribute not only to improved air conditions in cities, but also more lively and humanized public space).

The British Council of Slovenia set up the group of young professionals to develop different ideas of how to reduce the CO2 footprint. The group of 5 participants (a researcher, a web developer, a politician, a journalist and a public relations consultant) developed an idea that would contribute to less cars and more bikers on the streets.

Partners The British Council of Slovenia was the institution were the initiators met for the first time and developed the idea to some extent. When the British Council’s project saw an end the three of them stayed together and continued their volunteer work on the idea as an informal group of interested citizens. During the implementation of the project they managed to gain the support of different institutional partners such as Agency for Safe Transports, the Urban Planning Institute of the Republic of Slovenia (UIRS), the Ministry of transports, and The city of Ljubljana.

Every year one foreign embassy was partner too by providing the gifts for the competition. The first year the Danish Embassy provided 3 bikes as the bigger gift/prize for the winner of the competition, followed by the UK embassy, which participated 2 years as well as Austrian and Dutch embassies which participated one year. They all provided gifts related to cycling (bikes or cycling holydays).

People of the cities who could enjoy the benefits of riding a bike instead of driving the car in the city.

General urban population who benefited with less clutter of motorized traffic in the public space.

The municipalities across Slovenia which could take the advantage of V troje campaign to promote usage of sustainable means of transportation to improve living conditions in the cities (better air, higher quality of open urban spaces etc.).

“The planet” – thanks to the initiative which was encouraging people to stop taking their cars the CO2 footprint was lowered.

Web design: Thanks to the funds of the the Do the Right Mix European award (7000 euros) the design of a better and easy to manage website where people could register on-line and full fill an online calendars was enabled. Before this new web page the evaluation process was very time consuming. Initiators had to open each printed calendar and full fill an Excel formula. Today everything is easier thanks to a interactive website tables that are automated.