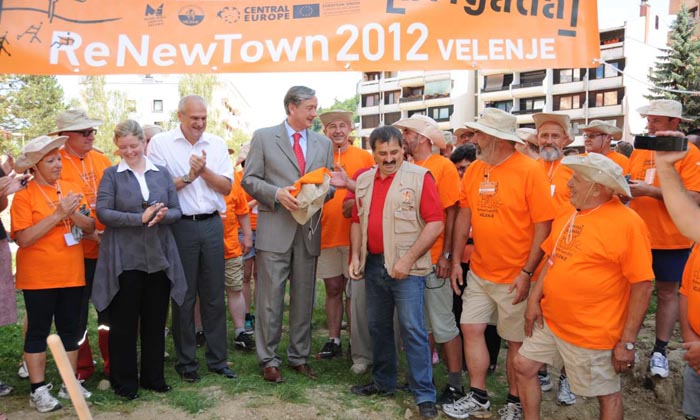 Velenje was once a small village in the north-east of Slovenia. After the Second World War, during the socialist regime of Tito, the small village evolved in a city due to the coal-mining activities initiated in the 50’s. The city was completely built during this period and the idea was to build a “city in a park”, to give to the miners some fresh air after their underground work activities. A lot of volunteers help in the construction of the housing units, infrastructures and administrative buildings. Following this socialist tradition which is still present nowadays, the ReNewTown pilot project in Velenje wanted to promote the restructuration of one of the public spaces in this city with the help of the citizens. Indeed, in Velenje some public spaces were in poor state. Surveys were conducted during the second phase of the project in order to see what the citizens wanted. In this case, they choose a children playground. The survey also asks who was ready to participate in the construction. 71% of the respondents answer positively.

The ReNewTown Project is the starting point of this project. They decided to implemented this public space renovation with the agreement of municipality and others stakeholders (general population, youth center of Velenje, architects, local community of Gorica). They created a Velenje team project (a local team group) in order to analyze the documentation and conducted surveys in the city.

To build the new public space, 64 volunteers from the neighborhood was present, offering physical help. They accomplished 1.567 hours of work during 5 days, from the 9 of July of 2012 to the 13 of July of 2012. The final beneficiaries are the local inhabitants who have now a new place to gather, a more functional and modern one. For the children a better place to play was created.

Ddesign was important in this project, because without it the renovation of the playground could not happen. But the urban design was not a participatory process because the citizens were not invited to produce their own conception of the public space. The stakeholders chose the best architectural design together.