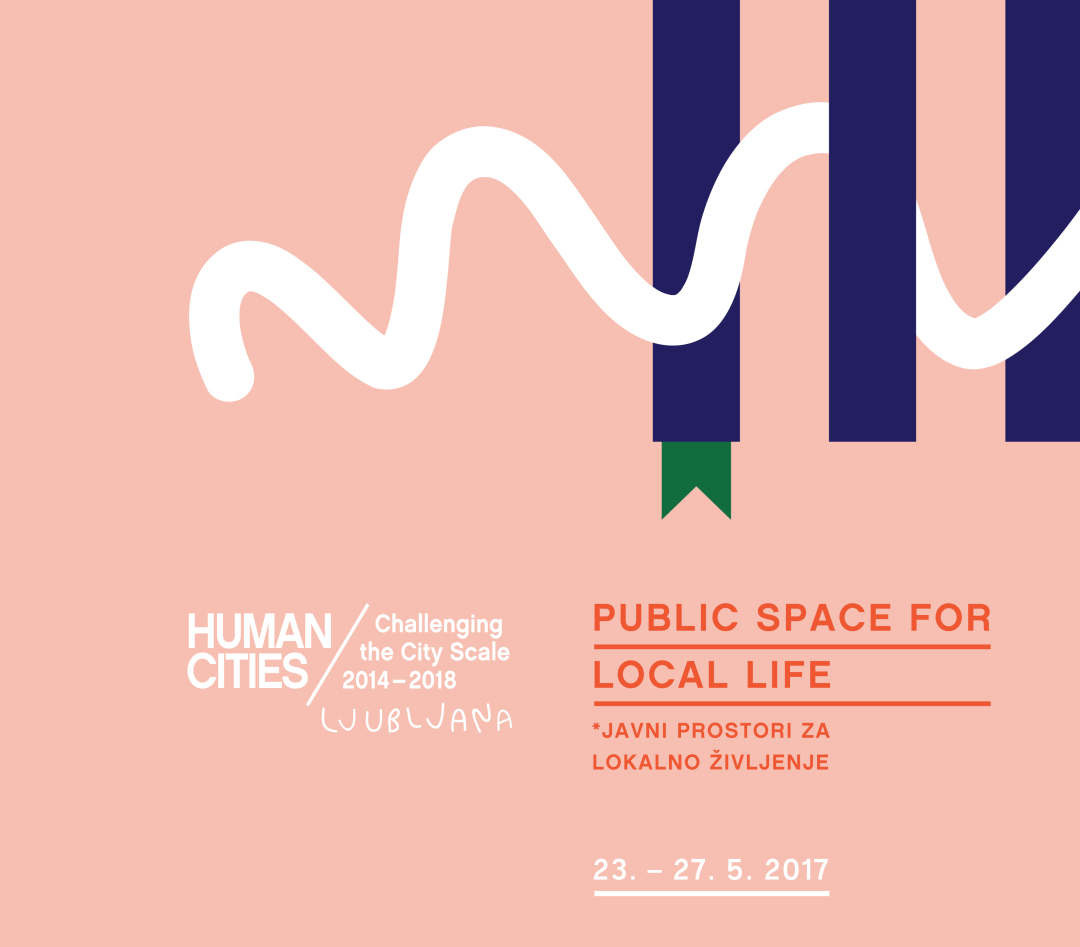 A joint event of EU Human Cities partnership and AESOP Thematic Group Public Spaces and Urban Cultures hosted by Urban Planning Institute of the Republic of Slovenia (UIRS) and University of Ljubljana, Faculty of architecture (UL-FA), Ljubljana, 24 May 2017.

Urban Planning Institute of the Republic of Slovenia (UIRS) and partners hosted a 5-day international event addressing participatory planning of local urban public space in socially, economically and ethnically increasingly diverse communities. The event was structured in three interrelated activities: a seminar, a workshop and a field-trip. Special emphasis was given to the means of revealing shared values that local inhabitants and other users of local environments have in common, and are an important base for collaborative improvements of local environments.

This joint event was the meeting point between two different European work groups: Human Cities and the Association of European Schools of Planning (AESOP).

On the one hand, the European partnership Human Cities (2008-2010, 2010-2012, 2014-2018) is addressing the issue of citizen participation in contemporary urban design. A particular focus is on bottom-up initiatives that self-organize in order to improve public spaces in their living environments. Important pillars of the project are research, experimental and educational activities related to public spaces. The main goal is two-fold: (1) to help citizens develop their affinity with common urban spaces and strengthen their approaches to participatory re-design of these spaces; (2) to advance the theoretical foundations in the field of participatory provision of urban public spaces. It also stresses the importance of citizen’s shared values in relation to their public urban spaces, such as empathy, wellbeing, intimacy, sustainability, conviviality, mobility, accessibility, imagination, leisure, aesthetics, sensoriality, solidarity and respect.

On the other hand, the AESOP Thematic Group Public Spaces and Urban Cultures values a critical and constructive dialogue on the processes relating to series UNSTABLE GEOGRAPHIES – DISLOCATED PUBLICS (2016-2018) that equally involves researchers and practitioners, locals and guests. The proposed umbrella topic aims to explore and rethink relations amongst different concepts and meanings related to (1) cities facing austerity, crisis, and a variety of migration patterns, and (2) to civic responses, such as emerging practices of self-organization, social innovation, and planners’ investments in building solidarity, hope, and trust. The topic has been approached in a dialectical manner and conceived as a dynamic framework that allows for the exploration of various (relational) aspects of public spaces and urban cultures, as well as socio-theoretical approaches to critically investigate and shape these spaces and cultures.

On the first day of the event, 23 May 2017, Stefania Ragozino (IRISS CNR) held a lecture titled Possible trajectories to navigate neo-liberal urbanism in UK. Hybrid organizations to implement activist planning. She presented a heritage-led regeneration process led by a social cultural enterprise which is a rather new approach in Slovenian context and encouraged lively debate among the discussants.

On the second day, 24 May 2017, a Human Cities & AESOP joined seminar PUBLIC SPACES FOR LOCAL LIFE was held in the Faculty of architecture (UL) of Ljubljana.The seminar was started by Matej Nikšič (UIRS) with a short introduction of the Ljubljana’s Human Cities Event, followed by the welcome speeches by a director of Urban Planning Institute of the Republic of Slovenia (UIRS) Igor Bizjak and a dean of the Faculty of Architecture of the University of Ljubljana Peter Gabrijelčič. The past and ongoing activities of Human Cities partnership in Europe and specifically in St. Etienne (France) were introduced by the international lead of the project Josyane Franc (Cité du design), while Stefania Ragozino (IRISS CNR) presented aims and activities of AESOP’s thematic group Public Space and Urban Cultures

The keynote speech was given by Davide Fassi from the Politecnico di Milano. He presented actions in the public spaces that are based on co-design principles and enable people to make things happen in their living environments. He pointed out the role of universities in local communities as activators and developers of prototypes in cooperation with local residents, who take the role of not only beneficiaries but also activists that can sustain these activities in a long term. After the keynote two authors had the opportunity to argue on the topics they proposed to an open call for contributions. Boštjan Bugarič (Faculty of Architecture, Ljubljana) explained his work on communication tools for designing public space, while Tomaž Pipan (Biotechnical Faculty, UL) gave a lecture on spatial data and interaction technologies in public participation. The first session and the discussion was moderated by Stefania Ragozino (IRISS CNR).

In a second part of the seminar many authors presented their research or practical work in a form of pecha kucha. Vincent Chukwuemeka (Department of Architecture, Ghent) introduced his thesis related to collective spaces of informal and formal markets as drivers of self-organisation processes of urban growth on the case of Nigeria. Merve Demiroz (Polytechnic of Turin) presented potentials of self-organized communities in the urban regeneration on the case of Izmir, Turkey. The role of open space for the healthy childhood and active ageing was presented by Katarina Ana Lestan (Biotechnical Faculty, UL), while Marta Popaszkiewicz (Faculty of Architecture, Warsaw) talked about the commonly created public spaces on the case of Warsaw local centers. Vojko Vavpotič (Local renewal office of Planina neighbourhood, Kranj) explained how they are pioneering the establishment of a local regeneration office – first of its kind in Slovenia. Andrej Pogačnik addressed the topic of the reconstruction of unbuilt areas within housing communities and exposed the privatization issues. Similarly, Zala Velkavrh (KD prostoRož) tackled the issue of ownership in the renewal of public spaces in residential neighbourhoods, which is characteristic for the post socialist cities. Ewa Gołębiowska (Zamek Cieszyn) elaborated on the need of comprehensive approach to urban regeneration on the case of mobility issues in her city. Ilona Gurjanova (Estonian Association of Designers) concluded the session by arguing that in order to enjoy urban public open space fully one also needs to have a chance of escape into his intimate, relaxation space. Second session was moderated by Stefania Ragozino (IRISS CNR) and Weronika Mazurkiewicz (Gdansk University of Technology). After pecha kucha presentations all presenters and audience had interesting discussion about the issue presented during the session. This second part of the seminar was closed by Matej Nikšič (UIRS) who also introduced the final session.

The concluding session was opened by Luka Skansi (Faculty of Architecture, Reka and Ljubljana) who made an introduction of Ruski Car neighbourhood, in which the next day of the event a workshop was going to be held. He exposed the basic urban planning and design principles that guided the conception of the neighbourghood and put them in a broader context of what was then Yugoslav and international urban planning. The final presentation was given by Damjana Zaviršek Hudnik from civil initiative Skupaj na ploščad! Who presented the already existing participatory approaches at Bratovševa ploščad, the central open space of Ruski car neighbourhood. On the third day, 25 May 2017, a series of workshops took place in the northern outskirt of Ljubljana, in the Ruski car neighbourhood.

First workshop PHOTOSTORY OF OUR NEIGHBOURHOOD was led by Matej Nikšič and Biba Tominc (UIRS). The workshop was a re-dress of a 2016 action when the residents of housing estates in Slovenia and abroad were invited to analyze their living environments through photography and attached captions. The participants walked through the estate with their photocameras and took pictures of the neighbourhood with five analytical categories in mind. At the end they submitted the photos to the digital archives along with the captions to be later added to UIRS’s page to the Photostory of our neighbourhood.

Second workshop WE DRAW! A SKETCHWALK THROUGH THE NEIGHBORHOOD was organized by Tanja Simonič Korošak (Studio TSK). Participants learned how to use ‘shorthand’ sketchbook technique to draw objects, landscapes and people. On a walk through the neighborhood they stopped at three places, and by drawing the observed scenes and events, became part of these places. Thus experience became not only visual, but multi-sensoric. Followed by short demonstration of sketching, the participants tried to capture into their sketchbooks the action in open public space and people in the urban context. At the end the sketches were digitalized. / Photo: Blaž Jamšek, Human Cities Ljubljana, 2017 Third workshop CO-DESIGNING LOCAL PUBLIC SPACES WITH CHILDREN – LET’S MAKE NEIGHBOURS’ CORNER was organized by Nina Goršič (UIRS) Damjana Zaviršek Hudnik and Sandra Banfi Škrbec (Skupaj na ploščad!). In this workshop participants worked together to set up two nodes of encounter at Bratovševa ploščad. Thus they created a small point in space where they tried to incorporate a variety of activities that can connect the inhabitants of residential area while entertaining, gardening, reading, caring for plants and animals etc. They built the insects&birds house, added a bulletin board to one of them and knjigobežnica – a bookshelf – to the other. They completed the new arrangements by planting honey-plants. Local herbalists and pupils from local primary school also joined this workshop. The fourth workshop SETTING UP AN OPEN-AIR MEETING ROOM was organized by Alenka Fikfak, Miha Konjar, Janez Grom and Urša Kalčič (Faculty of architecture, Ljubljana). Workshop followed the invited call for ideas to the students of the Faculty of Architecture in Ljubljana to thinking of a “gathering space” at Bratovševa platform under the patronage of Lafarge Ltd. The participants together with students set up a temporary wooden pavilion. The pavilion is inviting residents to pause in open public space and at the same time serves as an exhibition space for the students’ submitted projects proposals during summer months. The day ended with official opening of the HUMAN CITIES EXHIBITION LJUBLJANA at four different locations in the neighborhood. The official opening talk was held by the president of the local council Amir Crnojević. First exhibition titled SHARED VALUES OF HUMAN CITIES addressed the importance of the shared values that local inhabitants share in order to set up common visions for the future of their living environments in general and public spaces in particular. The second section of the exhibition titled PUBLIC SPACE AND PARTICIPATION THROUGH THE EYES OF CHILDREN presented the process and results of seven workshops with local children rising various questions related to participatory urbanism and culture of built space. The third section titled PHOTOSTORY OF OUR NEIGHBOURHOOD presented winning photos that were submitted to the public call for analytical photo-stories of large housing estates. The last exhibition titled STUDENTS’ IDEAS FOR BRATOVŠEVA PLOŠČAD presented the ideas of future young urban planners for the redesign of Bratovševa pločad. Along the exhibition opening UIRS awarded the winners of the Photostory of our neighborhood competition and the call for student’s ideas.

The full catalogue of the HUMAN CITIES EXHIBITION LJUBLJANA can be viewed and downloaded here. The evening program of the third day of the event was the opening of BIO 25 at the Museum of architecture and design (MAO) and the installation at Županova jama cave near Ljubljana. The morning of the fourth day, 26 May 2017, was reserved for a technical meeting of Human Cities. In the afternoon, a walking tour by an architect and urban planner Ivan Stanič (City of Ljubljana) revealed how the city of Ljubljana approached the urban regeneration of the central part of the city through public space improvements. The official programme ended by a nice boat trip along Ljubljanica river and later on at the Odprta kuhna/Open Kitchen, open-air restaurants place at Ljubljana Market.