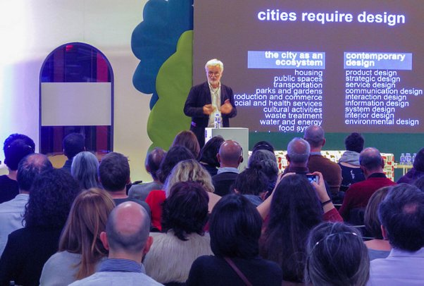 In November the city of Bilbao hosted a 4-day international event that gathered the partners of the Human Cities project. During these days the representatives of the partner cities took part in several activities organised specially for them and some other programmed within Bilbao-Bizkaia Design Week 2017.

The first activity included in Human Cities Bilbao program was the presentation of the guide “Recommendations for interventions in public areas” to the partners of HC project at Azkuna Zentroa, venue of the Bilbao-Bizkaia Design Week 2107.

Two of the members of Urbanbat, local partner of HC project, explained that the recommendations included in this document were drawn up during the citizen participation laboratory “Walking the streets!” organized by Urbanbat in the frame of the project and try to bring together all the comments and suggestions of the participants and show a kind of strategic framework for future urban interventions in our neighbourhoods.

After reading in group these key recommendations, the HC partners had the opportunity to discuss about them.

This first day ended with the exhibition opening, that was held in the same venue, Azkuna Zentroa, and was opened by María J. del Blanco as representative of Bilbao Ekintza, the Economic Promotion Agency of the Bilbao City Council. This exhibition, opened for the public during the Bilbao-Bizkaia Design Week, showcased the Human Cities experimentation projects throughout Europe made by the participating Human Cities network members. More than 1.100 people had the opportunity to visit this exhibition throughout this week and learn about all the projects carried out by the cities network. The full information included in the exposition panels can be viewed and downloaded here: https://drive.google.com/drive/folders/1QVBvmziO-S9xC7_iLrImhwbAzKJ7H-8d The conference “Cities & Design”, part of the program of the Bilbao-Bizkaia Design Week, brought together the members of the Human Cities project with local professionals working on the field of design to reflect on service design for the cities: how to create the next generation of social and public services based on the dialogue and collaboration between citizens and public institutions and how to design a sustainable future in common. Some of the speakers of this event were: Ezio Manzini, Itizar Pobes, Daniela Patti and Georgina Voss. [caption id="attachment_2695" align="aligncenter" width="424"] The “Cities & Design” conference[/caption]   The third day we took part in a visit to Bilbao la Vieja, the area in which the experimentation of the Human Cities project has been carried out, and learn about the process By participating in several citizen laboratories, the neighbours of the area proposed some creative solutions of intervention in the public space meeting specific desires or needs identified by them. One of these solutions was related to the need to connect the three neighbourhoods that make up what is commonly named Bilbao la Vieja. For this, the participants proposed to create some designs for the public space that draw an itinerary to link these neighbourhoods and, at the same time, highlight the intangible heritage of the area (the collective memory, its culture, the contribution of women to its development…) and paint them in ten roller blinds spread along the neighbourhood. H.C partners met the different agents involved in the experimentation carried out in the frame of the project: artists, neighbours and socio-cultural institutions who took part in citizen laboratories, companies based in the area working in the field of collaborative design…who explained them how this participatory process has been an opportunity to recognize each other, share experiences and work on the design of shared strategies that contribute to improve the neighbourhood in an inclusive way. [caption id="attachment_2699" align="aligncenter" width="425"] All Human Cities partners in front of a roller blind painted by a local artist in the frame of the project.[/caption] [caption id="attachment_2700" align="aligncenter" width="425"] One of the artists and the art work produced in the frame of the project to highlight the important role of the women in the neighbourhood.[/caption]   The visit to the experimentation area ended with the workshop “Funding the cooperative city” carried out at WikiToki a collaborative work space that plays an important role in the neighbourhood. This workshop was led by Daniela Patti and Levente Polyák from Eutropian company who made us reflect and debate in groups about community-led urban development in European cities in the actual context of austerity measures, unemployment and the gradual withdrawal of public administrations from social services. It was highlighted the importance of self-organised, locally rooted, inclusive and resilient community networks and civic spaces. [caption id="attachment_2701" align="aligncenter" width="424"] Group picture of all Human Cities partners and the full Bilbao Human Cities experimentation team.[/caption]   The video that shows the citizen laboratories and the interventions: https://www.youtube.com/watch?v=IMnCjl4vzgI
Share