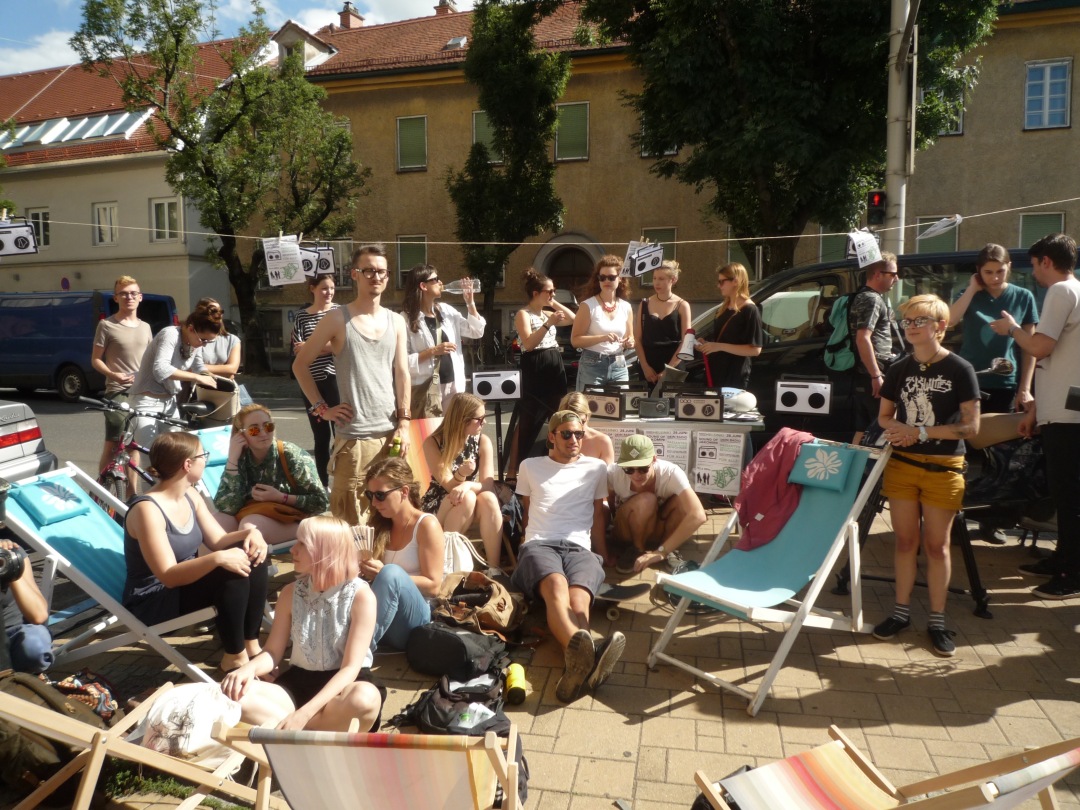 5 Days Jakomini: The Final – We take the Public Space!

“A person not taking any interest in his city, is not a silent, but a bad citizen.” (Perikles)

Wedged between house walls, passing cars and motorbikes the closing event of the experimentation lab took place in summery Graz. With the help of megaphones and the occupation of traffic islands, parking lots and footpaths the protagonists asserted their claim for more publicly available space for the residents of Jakomini district. Let’s remember that the investigation area in the heart of the city definitely offers some benefits; still, we found out beforehand through numerous interviews and spatial analyses that the area in question lacks high-quality recreational areas for its residents. For this purpose, the participants’ contributions were particularly helpful (see 5 Days in Jakomini – the symposium) as different views of various participants and national as well as international experts were introduced.   3-Minute Service The 3-minute service was further developed. Again, numerous businesspeople took part in the activity. The „Throne of Service“ is now easier to use and quieter, the offers are more sophisticated and there are stops at various places so that interested people could queue for a ride. As a reminder: The theory the designers had in mind was that there was no real space in Jakoministraße which could be offered as high-quality area to stay and relax. Passing through Jakoministraße takes 3 minutes on average. That’s why the 3-minute service replaces the walk through the street with an interesting and sensual ride: Readings, guitar concerts, head massages and culinary delights are included. The aim is not to shorten the average stay but to enhance the quality of the time spent there.

Sound of Jakomini Another group of students worked on the realisation of a radio programme. To create more awareness for the borough they had the idea to collaborate with the local radio station Helsinki. Their idea was to promote the district with a radio programme called “The sound of Jakomini”. The idea was to have a programme for the residents produced by Jakomini inhabitants. The students recorded random outdoor noises from Jakomini’s streets to create a sound that would represent the borough. Meanwhile, a teaser and a jingle have already been produced and on the occasion of the event the first programme was broadcast.

[audio mp3="http://humancities.eu/wp-content/uploads/2016/12/SOJ_Jingle.mp3"][/audio]   By the Way – Jakomini Quiz Within the course of the seminar Gamification numerous activities were developed in the district. One of those was a quiz where you would have to stroll through the district to search for answers which cannot be found on the internet. Therefore you have to walk the streets with your eyes wide open in order to detect knights on house fronts or to have a closer look at shop windows. This action was very much liked by shopkeepers. The prizes you could win were exclusively taken from shops or services in the district, for example tea, bouquets of flowers or a meal in an Italian restaurant. Place without Name Already during the co-creation meeting with Alice Holmberg an interesting open space in the district had been concentrated upon. It is not much more than a big traffic island, with a bit of grass and a transformer station. Directly next to it are either streets or parking lots. We chose that area as our event location. After a long day in the “place without a name” we realized that you can temporarily take this space into possession, but that you cannot really use it due to the high noise level. Thus, it is of utmost priority to address the topic of traffic calming for the nearby Grazbachgasse in order to create a high-quality free space for the residents. At the moment we are investigating where exactly measures could be taken along this arterial road. Succinct statements by residents - in dialect - are being shown on boards and signs: „It could be cleaner“, „We are lacking trash bins“, „Where shall I sit down?“ „The cars are speeding like hell“, „The multicultural feeling is great“ Seating Areas A further measure concerning the rise of the quality of stay was the illegal setting up of wooden folding tables and benches made of weatherproof yellow plywood. They corresponded well to the corporate design as the established colour of the Club Jakominiviertel is a strong yellow. They were designed and produced by architects and carpenters of the co-working space of the district. The size was deliberately chosen as to fit intarsia-like into the small indentations of the house fronts without hindering the pedestrians or presenting a risk potential. The folding tables were mounted to the house walls if the owners agreed or they were mounted to street lamps using brackets so that they could be safely dismounted again. 15 of those pieces of furniture were offered to the public in this approved activity without official permit. In the following weeks, it was very interesting to observe what had happened to the furniture which was given to the public: some benches changed their place overnight, but slowly the number of benches decreased and we think that they might have found their place in a private garden or flat. Some have been placed behind the claws grids of shops and have been standing there for half a year already. They are used by people to sit down and have a snack or make a phonecall or chat with others. They seem to be comfortable despite the low seat depth of only 25cm. Basically, everyone seems to be happy to get the possibility to sit down and rest at all. This work, however, did not only please the passers-by, but also the company DOKA which produced the panels. They will be sponsoring material for 100 more benches. Thus, a concept is being developed how the benches will then be implemented in the urban environment. One big challenge will be to bypass the high safety requirements and the really complicated approval procedures through subversive interventions for the benefit of the residents. In the continuation of this story you will get to know how the residents of Jakoministraße pulled out all the stops to use a „Window of Opportunities“ for their street party...