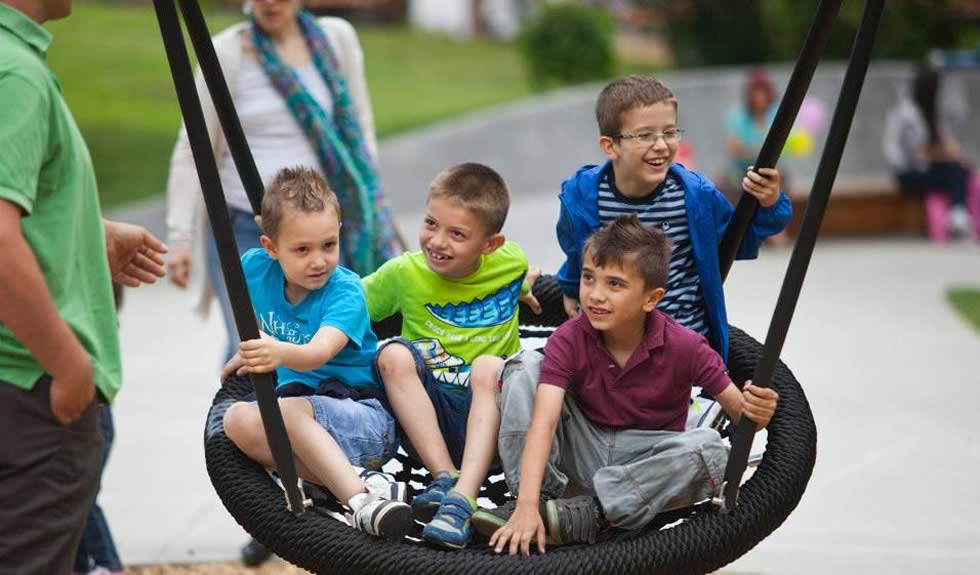 This exercise was successful, and BDW opened its most ambitious initiative to that point in a park in Belgrade – the creative playground in Kalemegdan in May 2015 – and called upon all public and private partners in Serbia and the region to support the continuation of the initiative. Here is the story about second creative playground for the children of Serbia.

Foundations are making a huge comeback in Belgrade. Following the decision to establish the commission for facades restoration which will be funded with donations, the City of Belgrade announced it continues the cooperation with Belgrade Design Week in building playgrounds for children, which will also be a modern form of endowment.

Thanks to a donation of “NIS a.d. Novi Sad”, the old playground in the centre of the famous Kalemegdan park in Belgrade, in front of the iconic Cvijeta Zuzorić pavilion – in desperate need of reconstruction – finally got the long awaited complete reconstruction, along with the new creative standards introduced by BDW in 2013 at the first Kalemegdan playground, only a couple of hundred meters away. Thanks to this new partnership between “NIS a.d. Novi Sad” and the City of Belgrade, the most important and frequented park and historic monument in the centre of Belgrade has finally reclaimed both of its traditional playgrounds for future generations, as it was custom for generations of people coming from all parts of the city to enjoy a play, as well as for tourists and visitors with children from all over the world. As a participant of the “Together for the Community” project, Belgrade Design Week, in collaboration with the City of Belgrade and the NIS corporation as main donors, the Embassy of Finland in Serbia and the Finnish company “Lappset” as partners, based on the project of the young architect Nina Radosavljevic, and built by the City Greenery of Belgrade, has provided a new, inspiring and safe place for children to play. We hope that these two new cases of public / private partnership in Serbia, will inspire and encourage other companies and institutions throughout the nation, to become part of our project with own proposals, initiatives and donations, and that very soon our dream of “100 CREATIVE BDW PLAYGROUNDS FOR CHILDREN OF SERBIA” will become reality in many other places throughout Serbia. OUR PARTNERS ABOUT SECOND CREATIVE PLAYGROUND

“Today we hand over to our youngest citizens a beautiful, modern, creative playground in our busiest and biggest park in Belgrade. Today is also the European Day of Parks, and a great opportunity to remind ourselves of the importance of green spaces and parks in our city. The City of Belgrade currently boasts 58 parks, the biggest of which is the one we are in today, the park of the Kalemegdan fortress, and it is my wish that we celebrate the next European Day of Parks with even more parks in our capital. I think it’s very important to pay attention to green spaces, to parks development and design. Over the past year we have organized many parks, but what is important is that in addition to parks, we also design children’s playgrounds. Parks, as green areas should be places where our fellow citizens spend their free time and use them for recreational activities, but those parks must have playgrounds like this one, so that our youngest citizens, our children, can spend their time being active.

I want to thank NIS because, as a friend of the City of Belgrade, it donated part of the funds to build this playground and make it look like the way it does today. I want to thank the Finnish Ambassador, since the equipment for this playground is provided from Finland with his assistance, and I would also like to thank our friends from Belgrade Design Week who came to the City of Belgrade with this lovely idea, connected all of us, and finally, successfully completed the whole project! The City of Belgrade has now become richer for another key “design-playground” – I think we all agree it is really beautiful, and I invite Belgraders to join us today, on weekends and days ahead, to spend time here with us.”

“As a future-oriented company, NIS gladly supports ideas and innovations that contribute to the welfare of the community, and “BDW’s Creative Parks” project is exactly that. Through our social responsibility programs we support a number of projects for the development of the community in which we operate, and particularly for the young. It was our great pleasure to support this wonderful idea and thus contribute to the opening of yet another inspirational playground for the children of Belgrade.”

“I was walking around Kalemegdan recently, and I realized that a year after the opening of the playground nothing was broken, which proves the quality of playground components is very high. I think that the implementation of this project was facilitated by good cooperation between all the partners: city authorities, investors, designers and Belgrade Design Week. Children’s enjoyment is the reason our company is particularly glad to be a part of this project”