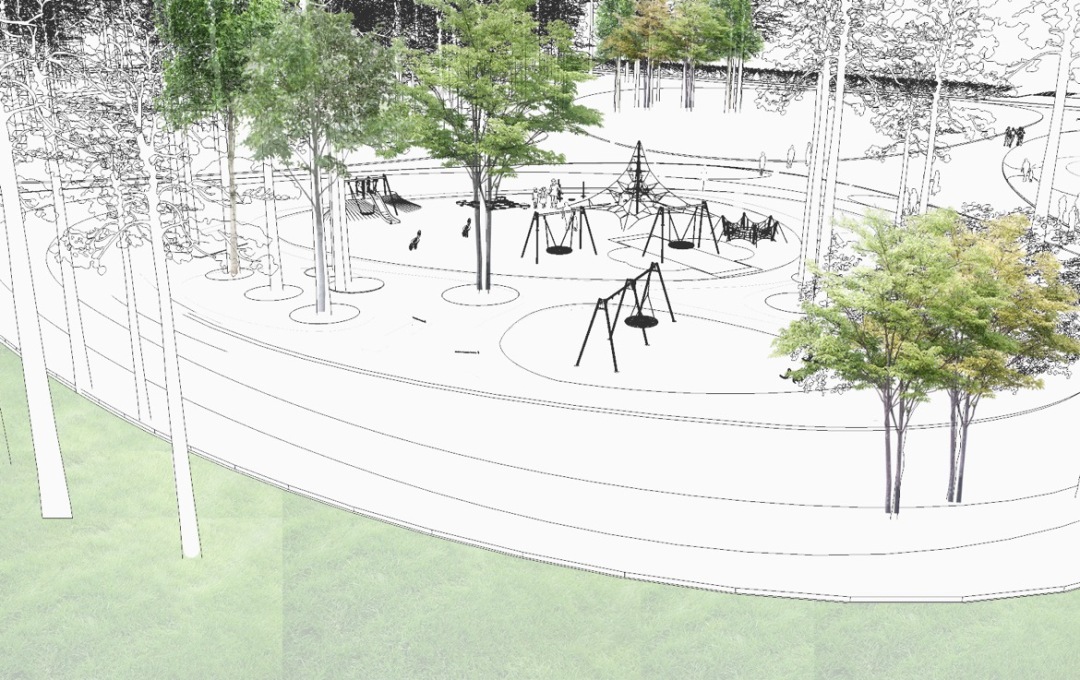 Project idea for children, youth and seniors playgrounds at the Grand Creative park of the City of Kragujevac

A playground for children, a water playground and a specially equipped exercising space for teenagers and seniors are adjusted in the zone for these facilities.

They are located in the center of the northern section of the Grand Park. These three micro units are arranged around the perimeter of large, open and sunny walkways, urban picnic areas, and the zone for potential gathering of a larger number of people. PLAYGROUND FOR TEENAGERS AND SENIORS are located close to the street near the Faculty of Engineering Sciences, as a minor motif and a separate entity. Hidden beneath the canopy of existing plantations of tall vegetation. The playground is equipped with devices that enable the entire complex of activities for seniors and teenagers – such as parkour exercises.

Analyzing the needs of parks users, we found out that many youngsters are improvising their own park our facilities from broken and abandoned equipment around the park. Equally strong we witnessed the park as extended living room used by the tenants of the nearby municipal retirement home. Consciously mixing younger and older citizens, we strive to try and encourage new relationship building with the desire to accomplish better understanding between these two age groups.

WATER SQUARE / PLAYGROUND, as a separate entity, is located in the sunniest section of the park. At the same time it is a sensation in the form of water vapor during most of the year but also a place for refreshment and children’s play in the warm summer days. In the overall landscape of the park, these two sections are designed as a neutral park platform, without the intention to be anything more than what they are.

CHILDREN’S PLAYGROUND is the largest island of the small park archipelago. The size of the playground is determined by the programme emerged through the monitoring of the numbers of children who visit the park and the way they use it. The spatial concept of the first part of the analysis of the Grand Park in Kragujevac was the basis for locating the children’s playground. The analysis is primarily an experiment about contemporary public space of the city and has served to review the potentials but also to assume the contours of a possible environment in which the playground is located: the modes of walking through the park are on a micro level included in the space of the playground in the form of concentric circles of different themes of movement.

The playground is divided into two parts for different age groups. Materials are selected according to the purpose of this small eco-continent and adjusted to both children and undisturbed life of existing greenery. The choice is characterized by minimal construction intervention and a choice of soft, safe and natural materials. The existing plants in the form of two groups of tall pines are integrated as supporting elements of design playgrounds and large natural shading.

The amorphous form of the playground is adapted to the size and elements of the children and space perception of the parents. The design is focused on a balanced tangle of curves at all levels, built around the edges of the playground with the landscape motif of a small hill with a mild and manageable decline. This motif of fencing and the slight elevation on flat ground is a sculptural intervention similar to land-art, and its main purpose is to highlight the importance of design and territories imagined, as a small geyser of children’s energy is in the green areas of the Grand Park in Kragujevac.