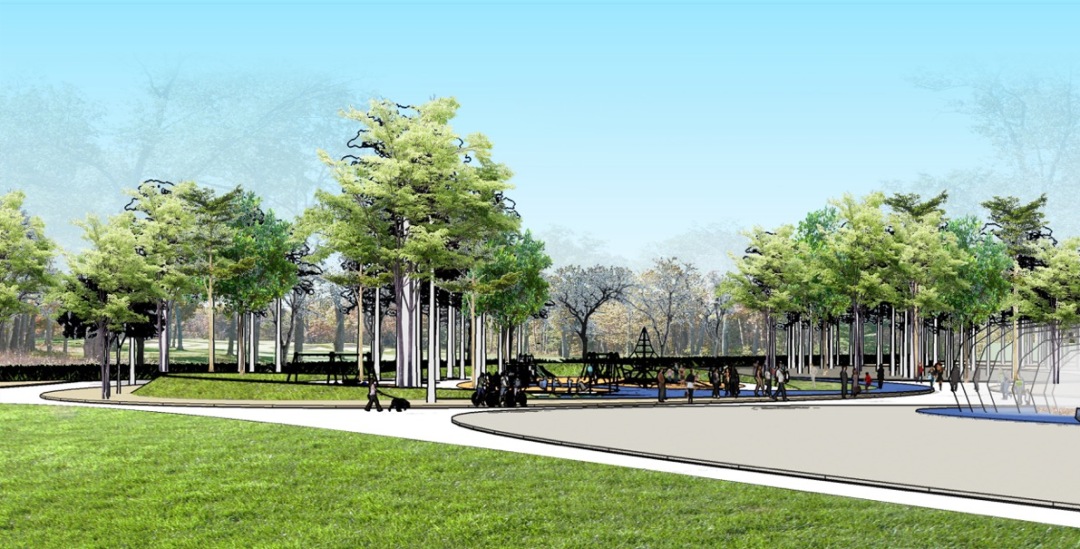 The Grand Creative park of the City of Kragujevac project

We hereby introduce the concept of the new project ” THE GRAND CREATIVE PARK OF THE CITY OF KRAGUJEVAC”, under the implementation of the “Dragica Nikolić” Foundation, the City of Kragujevac and Belgrade Design Week (BDW).

The new “GRAND CREATIVE PARK OF THE CITY OF KRAGUJEVAC” is an initiative by the First Lady of Serbia Dragica Nikolić, who follows the best tradition of pre-World War II Serbian benefactors, inspired by her own experiences of growing up and living in her hometown of Kragujevac, as well as with the experience of BDW in the implementation of the EU-backed project HUMAN CITIES/ and the non-profit campaign to build “100 creative playgrounds for the children of Serbia”, in cooperation with the Municipal Government of the City of Kragujevac.

The project is technically supported by companies such as LAPPSET from Finland and Viabizzuno from Italy, global innovation leaders in playgrounds and lighting solutions, as well BRAND NEW WORLD from Switzerland, as consultants. The Foundation “Dragica Nikolić” has donated the funding for the first phase of the project, based on BDW’s research work co-funded by the EU HUMAN CITIES/ project.

Ms. Nikolić, through the establishment of the Foundation provides an example to citizens of Serbia, spreading the idea of the necessity of mutual support and assistance, guided by the principles of public-private partnerships.Through realization of non-profit projects, such as building of numerous maternity wards and nurseries throughout Serbia, as well as providing much needed professional equipment to the ailing national medical system, Ms. Nikolić successfully pursues the main goal of the Foundation – to increase the birth rate in Serbia.

In that sense, the Foundation “Dragica Nikolić”, the City of Kragujevac and BDW invite all interested citizens, companies, institutions and professionals of good will from Serbia and abroad, to join this new non-profit campaign and help place a new, green, creative and cultural Kragujevac on a map of Serbia and Europe. THE CITY OF KRAGUJEVAC

Kragujevac is symbolically entering the EU before any other city in Serbia, by becoming part of the European project HUMAN CITIES /, which is co-funded by the European Union programme “Creative Europe”, as an innovative example of new thinking about the reconstruction of a city. The new concept for Kragujevac’s most important park opens the doors for the development of the park for at least the next ten years, both through public-private partnerships in financing and full participation of citizens in the decision-making process about the content of the park. The Great Park is traditionally a favorite walking place for all generations in Kragujevac, a dense canopy of century-old trees, walkways and benches that represent the right place for relaxation. Unfortunately, in the past few decades the park has inevitably shared the fate of the deterioration of the city.

The Great Park symbolizes the beginning of future revitalization of several key urban areas in the city of Kragujevac. The proposed new concept of the Great Park returns the park to the people of Kragujevac, who will be able to enjoy this beautiful urban oasis, enriched primarily with innovative and free-of-charge facilities. The formula for success is in the management of design principles – the thinking and the usage of innovative urban development methodologies and analysis which will be implemented in the project, leading to the realization of advanced designed content, tailored for different target groups that already use the park, and are expected to use it even more intensively in the future.

The City of Kragujevac has formed a special team for the project under the personal leadership of Mayor Radomir Nikolić, involving all key institutions of Kragujevac, from the Urban Planning Bureau to public utility companies necessary for the successful planning and development of the project, and invites all citizens and companies active in the city and region-wide to obtain all necessary information on how to become part of a great, new story – the story of “THE GRAND CREATIVE PARK OF THE CITY OF KRAGUJEVAC”.

Kragujevac is the fourth largest city in Serbia, with a population of 179,417 urban inhabitants, according to the 2011 poll, and 150,835 inhabitants in the suburban settlements. It is the center of the Šumadija region and is located about 120 kilometers south of Belgrade. Kragujevac is an important economic, cultural, educational and medical center of Šumadija, Pomoravlje and the neighboring regions. It is also the macro regional center for the regions of: Čačak, Kraljevo, Uzice, Jagodina, Krusevac, Pozarevac and northern Kosovo. By 1990, Kragujevac was the fifth most developed city in Yugoslavia right after Slovenian towns.

Today, Kragujevac is once again one of the strongest administrative, cultural, financial, industrial and political centers in the country. In many ways, this city can be called “the first in Serbia” – it was the first capital of the modern Serbian state (1818-1841); in Kragujevac, the first secondary school in Serbia was established between 1833 and 1835, and the lyceum (Licej) the precursor of the University of Belgrade, in 1838; the first court in 1820, the first theater (“Knjažesko – Serbian theater”) in 1835, the first newspaper (“Novine Serbian”), musical formations (“Knjažesko – Serbian gang”), first drug store, art gallery, museum, library…

After centuries of Ottoman (and Austro-Hungarian 1718-1739) rule, the city was liberated in 1815 from the Turks, and three years later declared the capital of the newly created state. Thus began its rapid development, the establishment of institutions of national importance and the massive immigration of the population, and in 1853 the beginning of industrial production in Serbia.

Ever since, Kragujevac has been a renowned industrial center, mainly due to significant military production, while since the mid-20th century, it is famous for the production of cars. The great contributor of the constant influx of population during the 20th century is the fact that Kragujevac was one of the largest industrial centers in Yugoslavia. Today Kragujevac attracts mainly young people who study at the University of Kragujevac, which has 11 faculties in the city and in neighboring municipalities.

Large arms, truck and car factories are located in Kragujevac. The city is among the four largest industrial centers in Serbia, given the fact that after World War II it became the largest industrial giant in the Balkans. The beginning of the disintegration of Yugoslavia had left a heavy impact on the economy of the city. Most of the largest manufacturing firms found them self in a difficult situation. In 2008, Italy’s Fiat announced the takeover of Kragujevac’s most significant company – Zastava Motors. Massive investments were made (around one billion euros), and the production of 300000 cars per year began. The halls were renovated, new substations were built, a many new employees were hired and the long-awaited production of the new Fiat model 500L had started.

THE HISTORY OF THE GRAND PARK

The Grand park is a favorite walking place for all generations in Kragujevac. Estblished in 1898, it is covered with more than 10 hectares of greenery, a dense canopy of century-old trees, walkways and benches that represent the right place for relaxation. In the Grand Park and its surroundings, sports facilities for basketball, football, volleyball, tennis, American football and handball, indoor and outdoor pools, a bubble room, and a large number of restaurants are located. Based on the description, the park could be classified as a French-style type, and with its position, size and content it became the most important park in the city. The period between 1891 and 1914 can be characterized as extremely important in the history of architecture and urban development of Kragujevac. During that time, the development of the city according to a master plan had begun and a great deal of attention was paid to planning the development of parks, resorts and greening the city center. The famous Serbian writer Milica Jakovljević (Mir-Jam), who spent her childhood and youth in Kragujevac, describes the Grand Park: “In the evenings we visited the park, or on Sundays we stood by the window to watch the people go for a walk. Then we went to the park because it was the only place of amusement.”